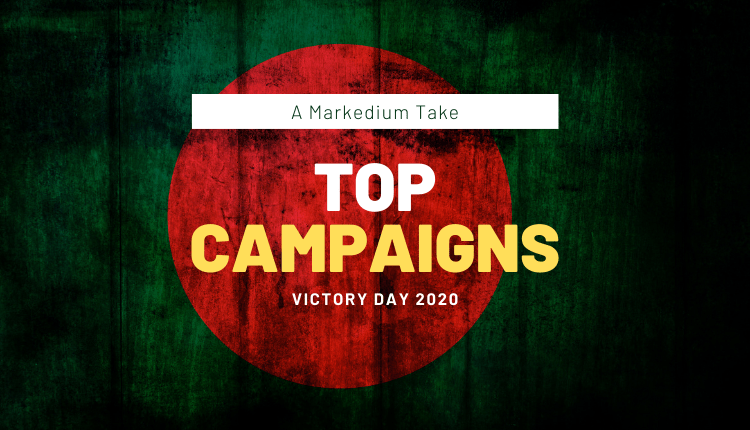 Hues of patriotism and optimism were splashed all around the digital space with Victory day 2020 campaigns as Bangladesh celebrated its 50th Victory day just 2 days back. Brands around the country leveraged the occasion to reach out to the nation with paying tribute to our freedom fighters and our national flag, addressing the covid-19 context and asking pertinent questions such women safety with Victory day campaigns 2020.

Read More: Tahsan To Launch A New Song With A Fresh Sip

Whether a spot creative on social media platforms or a full-fledged Independence Day campaign or digital films, brands managed to engrave the patriotic sentiment with each move.

Markedium lists top 7 campaigns that we believe stood out the most for this years’ victory day.

Conceptualized by Grey Dhaka, Grameenphone Bangladesh has launched an inspiring campaign titled Ek Joge Ekshathe to encourage everyone to do at least one good deed for Bangladesh.

The campaign’s one most effective side is in the naming of it as “Ek Joge “reminds us that one is not alone when doing something together. All Grameenphone tried to do here is to create an environment where everyone would feel such an urge to do something individually for Bangladesh.

The national flag of Bangladesh is the symbol of all the sacrifices made by our freedom fighters during the liberation war in 1971.

The irony is that there might be no shortage of enthusiasm among us to celebrate our victory day and wave our national flag with utmost pride, but sometimes unintentionally we tend to miss some basics and dishonor our national flag. This victory day, Olympic industries addressed the issue and dedicated a beautiful campaign to educate the nation about it.

Our victory is painted with the blood, sweat and tears of millions who sacrificed. Millions of freedom fighters sacrificed their lives in the battle, never to see their glorious motherland. But let us not forget the sacrifices that our women made. Millions of mothers, sisters, wives lost their dignity, faced inhumane sufferings, in hands of our oppressors. Some lived to tell the tale, while others never even came back.

In celebration of our 50th victory, Click LED sent a powerful message in their latest campaign. The campaign is dedicated to ignite our fighting spirits against the same wrongdoings occurring today.

This year on the eve of victory day Symphony mobile decided to uplift the youth energy to showcase the true essence of victory. Youth has been always an integral part of our development history. Starting from the Language Movement in 1952 to the Liberation War of 1971, the youth of Bangladesh always stepped up to assist the nation when the country needed them the most.

With the campaign, Symphony tried to portray the same youth energy as the driving power of our upcoming future. Symphony tried to encourage the youth of today to uplift their fighting spirit to help those in need to embrace the true stature of victory.

The emotional and inspiring campaign tells the story of a 14 years Taramon Bibi, who was not dragged or drafted into war, but volunteered to fight for her motherland and all her struggles.

“Bijoy (Victory)”; a word synonymous with every Bangladeshi in their hearts and souls. The word resembles the biggest pride that we, as a nation hold. This word depicts the struggles of millions of freedom fighters, both on and off the field. Their incredible sacrifices contributed in us attaining our victory as a sovereign country. Today, we stand as an independent country, victorious in gaining our identity from the hands of our opposition.

In celebration of our 50th Victory Day, Teer launched a campaign portraying a united Bangladesh.

So, this was our take of this year’s victory day campaign. If you think we have missed any campaign that should have been on the list, write us at [email protected].

Subscribe to our newsletter
Sign up here to get the latest news, updates and special offers delivered directly to your inbox.
You can unsubscribe at any time
0 0 votes
Article Rating
\2020ClickDecemberGrameenphonenestleOlympic Industries LtdSymphony Mobile
Share FacebookTwitterGoogle+ReddItWhatsAppPinterestEmailLinkedinTelegramViber