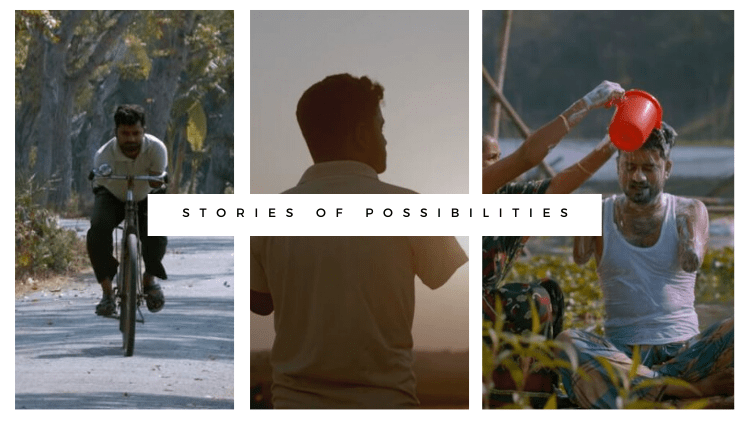 bKash-the MFS market leader of the country has rolled out its latest brand campaign featuring the story of a man named Kamrul who has lost a lot along the way but gone ahead on the path of possibility anyways and bKash was with him on this brave journey.

Throughout the 2mins 12 secs long AV, bKash’s till-date impact in improving the living standard of local mass is depicted with top-notch execution.

So, without any more delay, watch the campaign:

The whole campaign talks about an inspiring story of a man named Kamrul who lost his two hands due to an accident and found himself in an unimaginable struggling stage of life. However, his refusal to give up on life made him walk towards the path of self-belief and possibilities. Throughout this whole brave journey- he utilized bKash as a turning point when he could not reach the full potential in his business.

Read More: GRAMEENPHONE IS NOW A FAMILY OF 8 CRORES SUBSCRIBERS

First of all, we loved the campaign. Starting from the concept to scripting to the execution, we felt like everything was on point and talks about the sole purpose of bKash in Bangladesh, which we think is to solve real problems.

In recent times, we have seen so many MFS providers entering the Bangladeshi market. Thanks to the consumer acceptance and untimely curse of Covid-19 which worked like a blessing for the industry. However, almost 10 years ago- it was bKash that successfully popularized the concept of MFS in Bangladesh with an aim to include the local general mass in the financial ecosystem. It was all about solving real issues and giving the needed one a source of hope along the way.

The inspiring story of Kamrul in the campaign is proof that bKash still carries the belief in its core.

If bKash has such a role in your life or the life of someone around you, send bKash the stories. You can either write at https://www.bkash.com/stories​ or e-mail your stories at [email protected].

You can check the campaign rules and regulations here!

bKash will spread the best stories all over the country to inspire the Kamrul’s of the country. As let’s face it-

“When people refuse to give up, nothing is impossible.”

Prev Next
Subscribe to our newsletter
Sign up here to get the latest news, updates and special offers delivered directly to your inbox.
You can unsubscribe at any time
0 0 votes
Article Rating
2021bKashbKash Latest CampaignMarchMFS industry Bangladesh
Share FacebookTwitterGoogle+ReddItWhatsAppPinterestEmailLinkedinTelegramViber