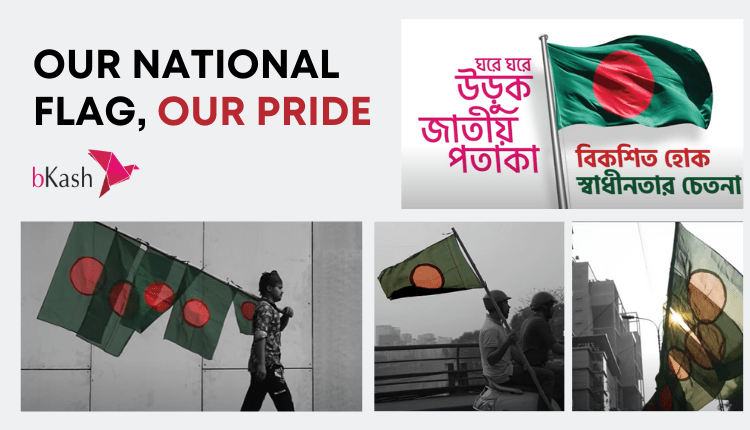 bKash reminded us of the bond we share with our national flag in their latest OVC on the premise of Bangladesh’s Independence Day this year. To re-ignite our emotional connection with the national flag, the power it transcends in us with its distinctive red-green color, and celebrate the sense of freedom bested upon us 50 years ago, bKash launched a campaign of hoisting up our national flag in every household and share online.

Through the short 43 seconds, OVC Iresh Zaker shared his childhood memory of flying the national flag early in the morning with his father Aly Zaker, the prominent Bangladeshi actor and a freedom fighter himself. His monologue with flashback visuals gave us a snippet of how he has seen the city those days, commemorating the independence of the country colored with red-green flags, and how mesmerized he felt by the emotions stemming from the celebratory environment.

If we recall from our childhood, many of us could relate to the story of the OVC!

Bangladesh’s National Flag: A motivation itself

During the war of liberation, our national flag has motivated thousands of freedom fighters, the general people of Bangladesh who were dreaming of a free nation. It kindled the fire within them to fight back, endure and sustain even in the deadliest confrontations.

After liberation, our national flag has become this unified symbol of our freedom, bravery, and motivation as a nation. bKash dedicated this campaign to exploring those emotions that we connect with even today.

Flying the National Flag: The celebration we have seen

The narrative Iresh Zaker shared may help you recall, there was a practice of buying national flags just before Independence Day and decorating houses with paper flags of smaller sizes. Elders would buy large-sized flags and would fly them from rooftops. There was this enthusiasm and sense of celebration that has somehow been missed for a long. As the narrative progressed, Iresh Zaker reminds us how these emotions are blended in our good deeds and intentions for the country across generations.

He ends the monologue with an invite to hoist the national flag from every household this Independence Day and share the memory through pictures or videos using #Bikoshito_Bangladesh and #shadhinota hashtags. A filter of the national flag has also been added to use on profile pictures and bKash invited us to share the pictures using the same hashtags.

The beauty of simplicity

This campaign is simple, to understand, relate and go through, it was an easy journey for a viewer. The storyboard, narration style, background score, and videography all along showed the journey that any citizen would connect with. bKash has always put out the Bangladeshi point of view for its campaigns. The Independence Day campaign was a successful representation of this brand’s essence of nationality.

What’s your thought on the campaign. Let us know.