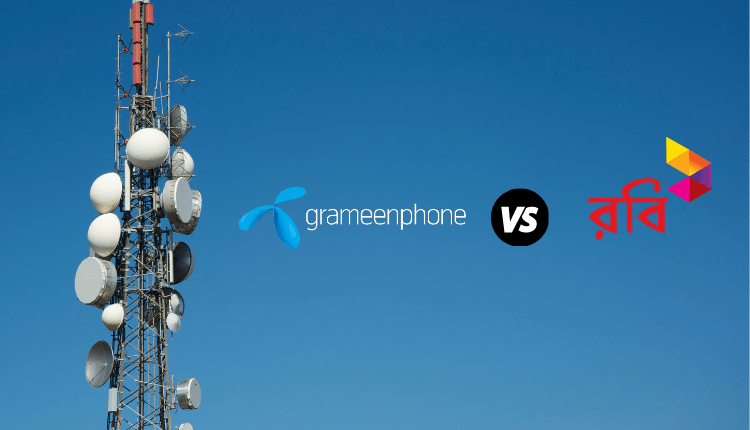 Grameen Phone and Robi, two of the largest telecommunication companies in Bangladesh have recently published their quarterly reports for the period Jan’21-Mar’21. We have taken a look at both the reports and here is a brief comparison between the two leading telecom giants of the country based on their performance

Revenue of Robi grew by 1.7% YoY whereas the revenue of Grameen Phone declined by 3.7% YoY. The profit of Robi increased by 82.4% YoY but Grameen Phone’s decreased by 16.7% YoY.

Grameen Phone’s revenue declined by 3.7 % YoY from Tk 36,169 million in Q1’20 to Tk 34,813 million in Q1’21. The de-growth is mainly driven by a decline in subscription & traffic revenue. Although internet subscribers increased by 1.7 million, data revenue also decreased by 4.4% YoY.

Robi’s revenue in Q1’21 was Tk 19,810 million compared to Tk 19,477 million in Q1’20. Revenue grew by 1.7% YoY mainly driven by the growth of data revenue. Voice revenue continued to decline due to more usage of OTT platforms like WhatsApp, Messenger, IMO, etc.

Grameen Phone’s profit is about 25 times greater than Robi even though the company has recently posted a de-growth of 16.7% YoY. On the other hand, Robi’s profit grew by 82.4% YoY. The lower profit margin of Robi is mainly attributed to the expansion strategy in establishing 4G sites to compete with its competitors.

With super-fast internet speed like 5G is soon to be available, and smartphones are becoming cheaper to ensure their availability to almost every corner of the country, we can assume that the use of voice calls will see a sharp dive in near future.

So, for the telecom companies, the battle is all about who wins the race of data!

Hence, we believe, this is the most exciting part of the whole comparison. You see, we all can agree to a fact that- in the upcoming future, the voice revenue will no longer be the most exciting revenue stream for the telecom service providers-it’s going to be all data.

And the market leader Grameenphone is facing a commendable challenge to keep up with its nearest competitor in terms of Data Revenue. Have a look:

Although Grameen Phone has higher data revenue compared to Robi, Robi’s data revenue is growing at a faster rate. About 39% of Robi’s total revenue is contributed by the data segment compared to 24% of Grameen Phone. As we mentioned above, due to the usage of OTT platforms like WhatsApp, Messenger, IMO, etc. voice revenue of the industry is gradually decreasing. Hence the focus on increasing data revenue is important for all the companies in the telecommunication industry.

According to GSMA, although Bangladesh has 95% 4G mobile network coverage only 28% of the total subscribers have adopted it. The smartphone adoption rate is only 41% which is lower than our South Asian peers like India, Pakistan. 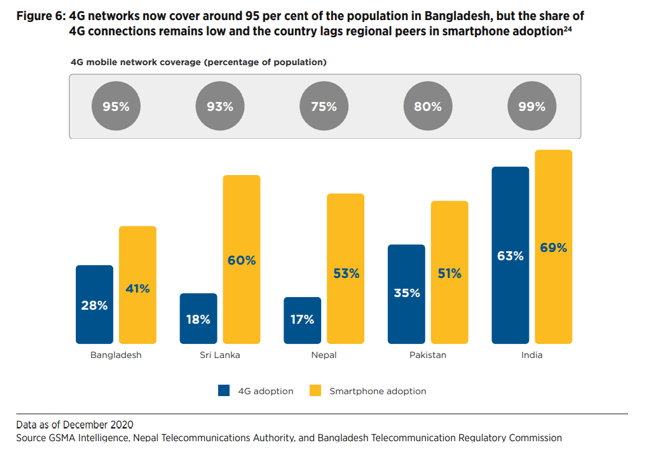 With the rise of smartphone usage and 4G adoption is it likely the use of OTT platforms will only be going to rise. Hence it is very important for both the companies to grow their data service segment to neutralize the declining trend of voice revenue.

Prev Next
Subscribe to our newsletter
Sign up here to get the latest news, updates and special offers delivered directly to your inbox.
You can unsubscribe at any time
0 0 votes
Article Rating
GPRobiteclo
Share FacebookTwitterGoogle+ReddItWhatsAppPinterestEmailLinkedinTelegramViber