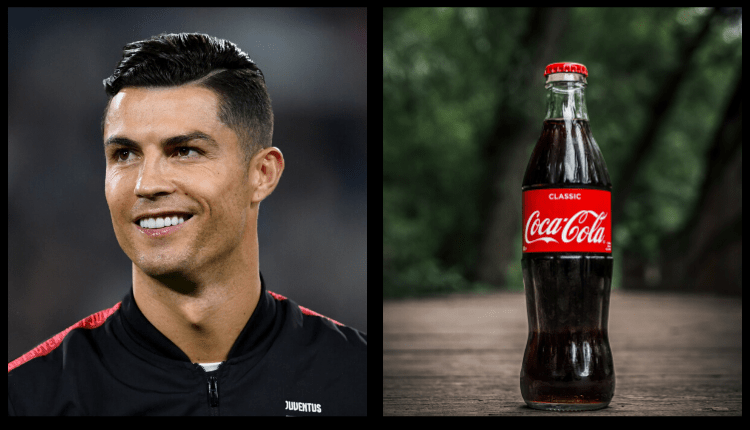 UEFA Euro 2021 is famous for its own reasons. However, this year’s Euro has another flamming point to its guard and it’s for none other than the Christiano Ronaldo aka Mr. CR7. On Tuesday, during the after-match press conference, the Portuguese captain removed two Coca-Cola bottles and insisted on drinking water.

Little did CR7 know that his gesture of removing a couple of coke bottles would cause a mess for the global beverage giant. What kind of Mess? It incurred a loss of $4B.

Read More: The Coca-Cola Company and The Ocean Cleanup are teaming up behind a clear objective: to stem the tide of marine waste by intercepting plastic debris from rivers around the world.

However, Coca-Cola responded with a statement and said that players are offered water, alongside Coca-Cola and Coca-Cola Zero Sugar on arrival at their press conferences.

The company said that “everyone is entitled to their drink preferences” and that everyone has different “tastes and needs”.
Now, there has been a lot of conversation around the response of coca-cola. Some saying it wasn’t a good one, and some suggesting it wasn’t enough to cover such a whopping loss.

The Loss- Was it that big?

Now, we are not saying $4B is a small number, of course, it’s not. It’s a mammoth amount. But in this regard, is it that big for a company like Coca-cola? Let’s have a look at the numbers.

Which is, to be honest not that bigger deal for a company of Coca-cola’s size. The stock price has also taken a small dip only of $2+ and we all know coca-cola is used to this kind of rise and drop due to all those protests against its health-related and environmental pollution issues. On that note, it needs probable one trend/news/ad to work in its favor to cover up the stock price fall.

Now, we don’t believe this is a loss that will carry on continuing due to the CR7 effect unless Coke gets itself into something major again.

About the response, we believe Coca-cola handled it the best way possible. Apparently, indeed it was a personal choice of CR7 to ask for water and remove the coca-cola bottles which indicate in the statement pretty clearly.

We believe, not doing something crazy and let things go with the flow is the best thing Coca-cola can do right now. However, another athlete Pogba removing the Heineken bottles might pose a threat to a future trend from the players.  But for now, let’s wait and watch.

Coca-Cola: The beginning of “Real Magic” or failure due to…

Prev Next
Subscribe to our newsletter
Sign up here to get the latest news, updates and special offers delivered directly to your inbox.
You can unsubscribe at any time
0 0 votes
Article Rating
Christiano RonaldoCoca Colacokecolacr7
Share FacebookTwitterGoogle+ReddItWhatsAppPinterestEmailLinkedinTelegramViber

LinkedIn granted opportunity to restrict Data-Scraping in its app!

The Legendary Journey Of Coca-Cola: Refreshing The World