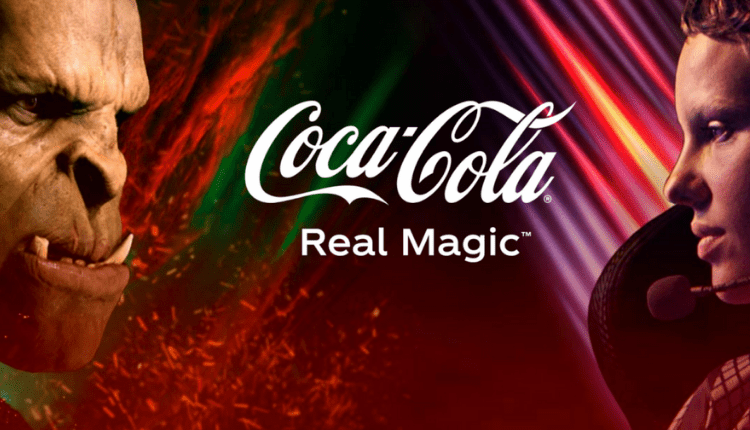 Coca-Cola: The beginning of “Real Magic” or failure due to poor stereotypes?3 min read

After a 5-year hiatus from global campaigns, Coca-Cola has stepped back into the arena with ‘Real Magic’ – a campaign that’s meant to help the company revive its performance and attempt to gather loyalty from Generation Z.

The first spot of the campaign, featuring gaming influencers Alan Walker, Ariel Powers, and Average Jonas, showcases a high-octane e-gaming tournament, with participants playing a role-playing game, comparable to the likes of World of Warcraft. In the middle of a nerve-wracking game, one of the competitors cracks opens a bottle of Coca-Cola.

Following the first sip, the contender’s character, albeit confusingly, experiences deep introspection, which leads it to drop its weapons. The character saves injured enemies and a sense of harmony settles over the world in the game, leaving the competitors and audience at the tournament speechless. The final copy reads ‘We are one Coke away from each other, thus upholding the brand’s new philosophy of ‘embracing the magic of humanity’.

If you haven’t already, have a look at the campaign:

The spot is also said to have 25 hidden codes that can be used to avail prizes on Twitch, the world’s leading interactive gaming platform.

As mentioned before, one of the key targets of the campaign is to attract Gen-Z consumers and initiate loyalty within them. Several regulatory bodies around the globe have been actively discouraging the consumption of soda. Schools have banned soda from cafeterias to instill better dietary habits among students. Gen-Z itself has been leaning towards healthier options such as vegan diets that don’t leave space for Coke.

Read more: Shikho’s Latest Campaign Urges Us To Take A Moment To Thank Our Teachers Who Inspired Us “TO BE US!”

All of this has been made worse for soda giants, like Coca-Cola, by the increasing options in beverages. Organic beverages, electrolyte drinks, or simply bottled water have started rivaling soda in popularity. Thus, Coca-Cola has not been able to garner the love from Gen-Z as it did with past generations.

Alongside Gen-Z gaming icons, the spot features people wearing outfits and makeup that many would describe as eccentric. Looking at these people, we can gather that Coca-Cola has tried to uphold the individuality and self-expression Gen-Z is known for.

However, this could also land Coca-Cola in hot water as the spot toes the line between appreciating Gen-Z’s values and poorly stereotyping them. Gen-Z already suffers from alienation by older generations which will only be made worse by pop-culture alien-like makeup and appearances used to represent them. Time will tell if Gen-Z responds positively or turns away once and for all due to poor stereotyping.

However, one must admit that the move has been a gutsy one on Coca-Cola’s part. The brand typically promotes harmony and togetherness from a family and friends oriented standpoint. It is definitely interesting to see them dabble into the ever-growing world of gaming and try their hand at convincing what is perhaps the most critical and least understood generation of all time. Amidst their battle against declining sales and company-wide restructuring, we can only wonder how the ‘Real Magic’ campaign will eventually play out.