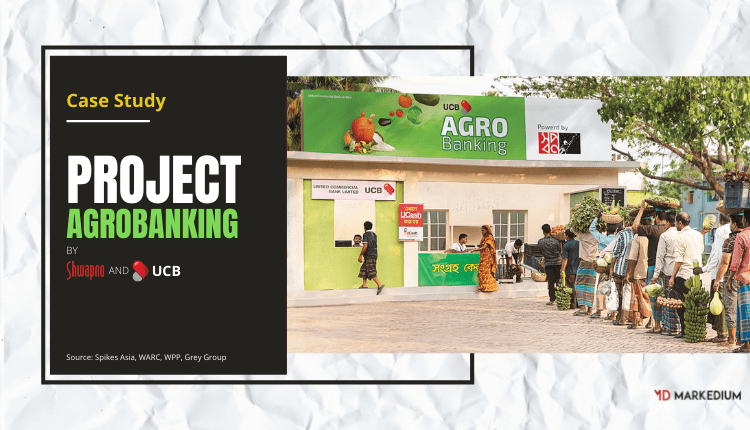 There is a statement that we all love in Markedium that states- ‘With Marketing, everything is possible.’ purpose-driven campaigns such as the one we will talk about today is a something that puts fuel to that belief of ours.

Yes, we are talking about ‘Project AgroBanking– A joint effort by Shwapno & UCB’. Initiated by Grey Bangladesh, the project earned numerous global awards like the heights of Cannes Lion, Spikes Asia, Effie, etc.

Here are some of the notable awards that Project AgroBanking has got over the years of its inception:

Besides the only Grand Effie, the project won 2 Golds and 1 Silver.

Around 3.6 crore farmers in Bangladesh have no account with a bank or any proper financial organizations which also covers most of the country’s approximate 33% unbanked population. As per the studies done by the campaign stakeholders, there were two counterproductive factors working behind such state-

For, United Commercial Bank, the problem was having a strict reputation of being a traditional bank that carries on mostly corporate banking resulting in a brand impression stating a lack of innovation or traits of a modern bank.

Hence, for Grey Bangladesh, it was a job to satisfy two very distinct objectives to serve the client and solve a major problem in the country. The two objectives were:

There were a few challenges that Grey Bangladesh had to conquer to serve the objectives:

The unbanked farmers carry a feeling that the banks are for the rich. They believe neither they have enough money to maintain a bank account nor the banks are designed for the mentioned segment to serve.

There is a significant percentage of farmers who can’t produce vegetables and fruits in quantities that satisfies the wholesale market. Fresh produce of vegetables and fruits starts losing its monetary value from the very moment it gets harvested. The farmers can’t even battle this due to the lack of storing facilities and the middleman gets an advantage from the situation by scoring a huge discount resulting in a huge loss for the farmers.

In rural parts of Bangladesh, the banks are situated at such distances that prove to be a hassle some journey for the farmers.

Not having enough money to maintain a steady bank account seemed to be the main hindrance for the farmers to getting included in the financial banking ecosystem. And due to the livelihood anchors, farmers couldn’t do much about the issue as well. On the other hand, the only thing that was in their power was their fresh produce of fresh vegetables and fruits.

So, here’s what the stakeholders of the company came up with:

“What if the farmers could sell their fresh surplus produce at a fair price while transferring these returns directly to a newly opened bank account at their convenience?”

The problem created the scope of the world’s first financial service designed to lift the unbanked farmers out of poverty by transforming their excess produce into bank account savings.

Now, United Commercial Bank like many other commercial banks doesn’t have any branches in the rural part of the country. However, it has UCash- a mobile financing wing of UCB, spread throughout the rural parts of the country with its agent points and some rural areas also have UCB Agent Banking outlets.

The main idea was to set up co-branded points for UCB and Shwapno.

Mostly the points were set where the UCash or Agent Banking Points was situated and where none is possible, mobile vans were used.

The co-branded spots were designed to have 2 counters, one each for both UCB and Shwapno. The process is following:

The price of the fresh produce got fixed every morning.

To get the primary audience involved in the campaign, the stakeholders utilized some of the age-old media vehicles like megaphone announcements, communication at the local marketplaces, etc. due to the lack of accessibility and effectiveness of modern media vehicles in those rural parts.

The service was launched initially in 5 villages and after seeing the positive participation from the farmers it was also initiated in 97 more villages.

Reportedly, in just one day, over 200 farmers signed up and thronged the village market with their produce.

After the campaign got traction, an OVC was created showing the services and distributed through social media channels to make the secondary audience (general mass) aware of the campaign.

The OVC was reportedly viewed by 50k+ people. Both global and local media shared their thoughts on the campaign, resulting in the effort earning a total of approximately $1.5 million worth of PR at $0 cost.

Since its inception, AgroBanking has opened 120k+ new bank accounts and a total of USD 4.7M+ worth of fresh produce has been collected and transformed into savings.