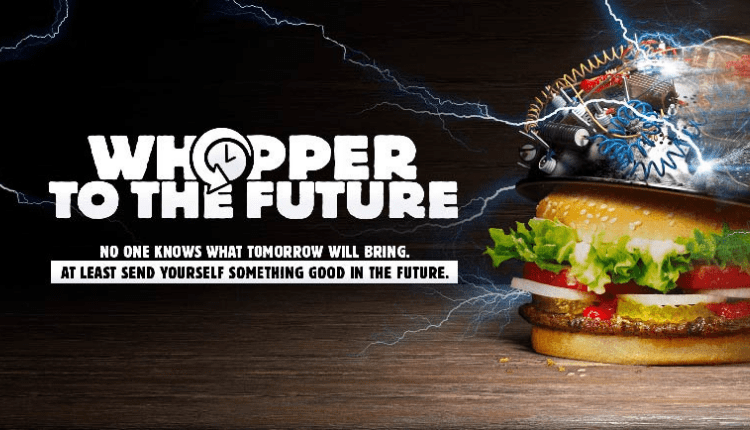 The world as we know it has changed. We are currently at a time of uncertainty, regarding our future. With the global pandemic extending its cordial stay, no one knows what might happen in the future. Well, Burger King France has its own theories. The French counterpart of the globally renowned fast-food giant has launched their latest Whopper campaign. The campaign is titled ‘Whopper to the Future by Burger King.’

Simply put, the campaign is a timeline of what the future ‘might’ look like. The campaign starts off with the year 2020; the year of COVID-19. As we start moving down the timeline, we come across 13 EME confinements by 2022. According to Burger King’s timeline, we will have our first extraterrestrial invasion around 700 years from now, in 2757. Maybe a new bug sweeping us off by the year 3000? How about a giant meteor hitting the earth probably, maybe around 3045? Let’s not forget the re-emergence of dinosaurs by 3129.

An enthralling timeline, summarized under a minute.

If you have read this far, it’s safe to say you have been hooked by Burger King’s latest campaign. First things first; relax, we will all be dead by then. But enough of this negativity. Doesn’t harm us to send a Whopper to the future for ourselves, now does it?

This is exactly what Burger King France has in mind. The brand has targeted the tech-savvy consumers with a futuristic approach for their Meilleur offering in the menu. In case you want to know, it means ‘best’ in French.

THE IMPACTFUL CALL TO ACTION

“No one knows what the future will hold for us, so at least send yourself something good in the future”.

A clinical campaign, with a creative executive, and a bold call to action.

What are your thoughts on Burger King France’s latest campaign? For more updates, stay with Markedium.

* The elements in the timeline is purely fictional, and not backed up by any scientific research, solely used for branding purposes by Burger King France.

Prev Next
Subscribe to our newsletter
Sign up here to get the latest news, updates and special offers delivered directly to your inbox.
You can unsubscribe at any time
0 0 votes
Article Rating
2021Burger KingJanuary
Share FacebookTwitterGoogle+ReddItWhatsAppPinterestEmailLinkedinTelegramViber