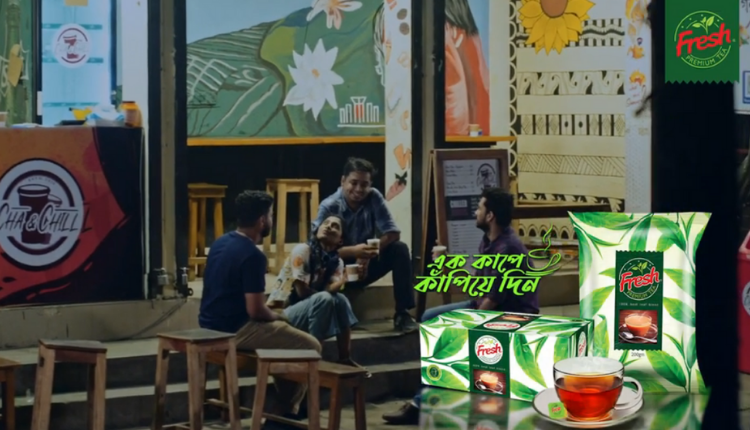 Fresh Premium Tea Brings You The Perfect Blend Of Friendship, Freshness, And Being Fearless2 min read

To some of us, tea is the name of an emotion. Emotion that revolves around our memories, our untold stories and our boldness. A sip of tea can rejuvenate us and become the highlight of our day. With a beautiful OVC, Fresh Premium Tea has exactly narrated the same.

Conceptualized by Magnito Digital, the online video content begins with four friends joyfully spending time with cha and adda. They started to reminisce their days on the rooftop of someone’s house since there was no dedicated place for them. Some times their stories found the space in balconies, but their adda never stopped. This was the first ovc from Fresh Premium Tea as a part of its ‘Kapie Dear Golpo’ campaign.

Even though different places helped them to build up their own memories, most of the time they would ask themselves about creating a single place that would celebrate the moments spent with friends, family, close ones and endless cups of teas.

And so, their journey of transforming an idea into a creation began. They faced the difficulty of finding the suitable place and managing others but they never stopped! No matter how tired they were, a sip of tea would turn their fatigue into another fresh start. They were determined that making a mark would require perseverance. An idea that began from the small balcony, took a big space in people’s heart by being popular as “Cha & Chill”. Now whenever these friends see the jolly faces sitting and sipping into the cups of “Cha & Chill”- it reminds them of their courageous stories and how their friendship created something very interesting.

This OVC of “ak cup e kapie din” by Fresh Premium Tea hits on the right notes of emotion and friendship. Not only they portrayed a very similar scenario of friendship, but they blended the emotion of tea and freshness into it.

“Shopnopuron”: The legacy of success passed on from father to daughter; brought to you by Robi

Evolution Of New Daraz: The Rebranding Of The E-Commerce Leader That Advances The “Shopping Odyssey”