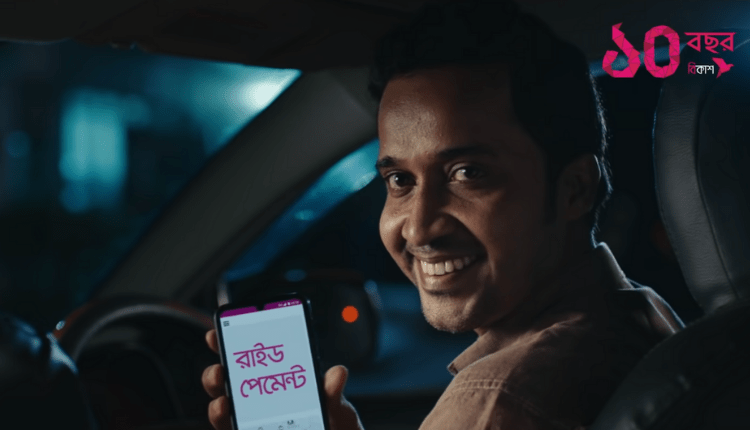 Having started off as a joint venture between BRAC Bank, Bangladesh, and USA’s Money in Motion, LLC, the platform initially catered to the unbanked population of Bangladesh. With a drive to eliminate middle men and the promise of secure money transfer to those who are susceptible to fraud, bKash began its journey in Bangladesh.

A decade later, bKash is no longer just the name of a company, instead, it has become synonymous with ‘money transfer’. It has become a friend in need even to the urban population, has proven itself more efficient and user-friendly than banks.

And in its online video commercial observing the important landmark, bKash celebrates just that. With a brand new tagline ‘shob shomoye shob proyojone’ bKash effectively communicates the brand’s value and peoples’ perception of it.

The OVC features people from every walk of life – farmers, students, parents, you name it. Some features of bKash are also highlighted in the OVC, such as sending money, making payments, bill payments. It emphasizes the benefits of using bKash such as cashback offers, too. The initial skepticism people had, wondering if the platform was legitimate or just another way to extort people out of their money, was also creatively addressed in the OVC.

What makes this OVC such a treat to watch is its simplicity. Just like the app itself, the OVC has a no-nonsense approach while getting the message across at lightning speed. We are adding this to the seemingly endless list of heartfelt content put out by bKash. Here’s to another 10 years of innovation and simplicity!