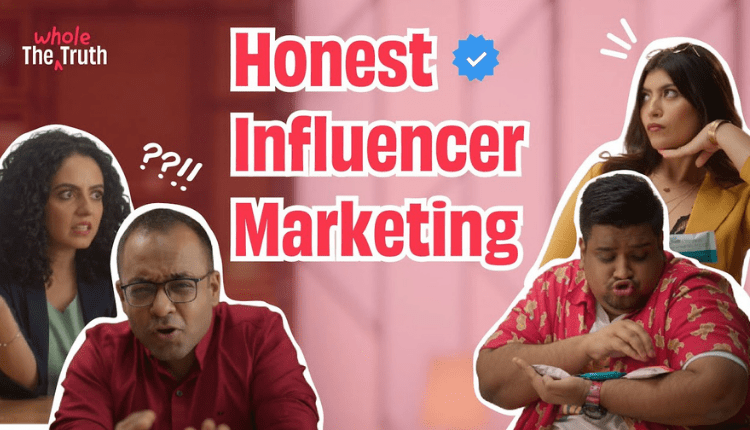 Indian clean-food company The Whole Truth Foods, has announced their own hunt to seek out “real” influencers to spread the word about their brand.

The program, “The Whole Truth-Sayers” was announced through an online video commercial and if this were a movie review, we’d say ‘we watched it so you don’t have to!’ because one of the very many irksome things about the spot is that it is 5 minutes 4 seconds long.

The idea behind this program is spectacular – people, truly, have begun turning away from influencer marketing. With a lot of people joining the bandwagon, it is no longer a secret that not every review or recommendation is organic.

The company’s desire to find honest influencers through an open-to-all program is one that several people will really appreciate. The timing picked by the company to launch this campaign could not have been more perfect, with trust in inorganic influencers dwindling but several people still looking to enter the scene.

However, the execution was so heavy on trivializing efforts made by youth, it won’t be a surprise if many others end up taking it to heart.

The spot starts with three clips. Out of them, the two notable ones are of a female influencer in a pink wig holding a poorly censored Shin Ramen cup, dubbed ‘KQueen721’ (no points for guessing who they were trying to drag) and the other of a male musician with his guitar strapped around his neck, standing in front of a mic presumable for an online performance.

From the dummy social media posts, it cuts to a man asking ‘these are the people that are going to promote our brand?’ incredulously. From the get-go, the spot does something two irk two groups that arguably dominate the virtual spaces these days.

Read more: Coca-Cola: The beginning of “Real Magic” or failure due to poor stereotypes?

Here, a woman walks in with a tray of products from the company and starts a dialogue that grossly invalidates influencers. She starts off by claiming that influencers are a place-holder for proper role models in the country – a take that is made much worse 2 seconds later when she implies that social media influencing requires no talent, thus there is an abundance of influencers.

Thus, the duo begins their hunt for the perfect influencer for their brand. The first candidate, a food blogger, doesn’t wholly approve of the product he’s asked to try out. He, however, offers to endorse them anyway. He stages ‘demos’ for each pay scale, upping his performance and reaction for every increment. However, his demos take up a solid 50 seconds of the spot and get increasingly obnoxious.

Read more: UnionBank: You May Now Kiss the App!

The one redeeming dialogue that comes out of this is that the influencer, when accused of putting out fake reviews for money, says that ‘you call this a fake review, I call this supporting the local food industry. For anyone who has seen influencer culture grow and bloom in our subcontinent, their role in helping the local industry is somewhat undeniable. It would have been better if this acknowledgment was not given in such a backhanded manner.

Fast-forwarding (several seconds) to the next candidate, we see a female beauty influencer who is shoved into the make-up-loving-bimbo-with-an-accent box this subcontinent seems to love and drag to no end. Among several other things, she gets shamed for getting a nose job.

Then we meet a white influencer and while his defending statement being ‘I am white’ could have been the redemption arc of this video’s humor, it is quickly offset by the female interviewer saying ‘Indians love is when white people tell us we’re good in an attempt to convince her boss into hiring him.

Read more: Gratitude and the Art of Giving Back with Walton on Teachers’ Day

We also meet a rapper, who dishes out a verse, impromptu, with lyrics about the company’s products and is met with nothing but boomer-like skepticism. The segment ends with another too-long demo from a quirky fitness instructor.

At the 3 minutes 30-second mark, the man stands up and begins a monologue about what ‘true influencing’ is and should be. He, correctly, addresses that influencing took off because people began losing trust from celebrity endorsers – and that influencers ‘should be better. However, the aggressiveness and air of superiority with which he speaks make him look like a bootleg motivational speaker, reminiscent of several people we cannot name for legal reasons. At the end of his painfully high and mighty monologue, his assistant recommends that they should find new influencers who will stick to the company’s desire for organic reviews.

Following this cut, we find out what is most likely the best attribute of this OVC. We learn that the CEO of The Whole Truth Foods himself featured in the OVC as the male interviewer as he talks about the influencer program and encourages ‘true’ influencers to apply and become a part of it. Seeing the CEO himself in the OVC definitely adds a more human touch to the brand’s image. Rather than using models, the CEO communicates the goals and desires of the brand directly which is truly commendable.

We hope that in the future, companies will be able to draw a clearer line between humor and offensive comments. Redeeming attributes of campaigns are often lost in cheap passes at humor, which we hope to see changing soon. As far as their intentions go, The Whole Truth Foods has taken a step in the right direction with great timing and we are excited to see where this leads!

Here’s What Microsoft’s New Windows 11 Update Has In Store For You!