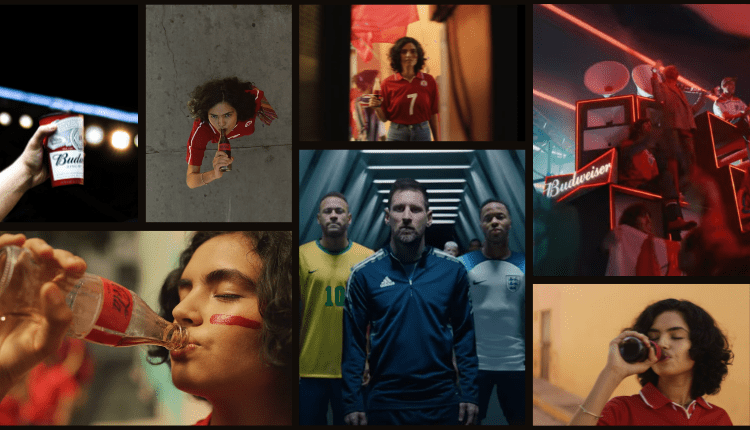 The FIFA World Cup is a glorious event that takes place once every four years. Apart from regular football fans, don’t we all become huge fans during the whole season?

The World Cup is consistently a momentous moment for brands to celebrate the delightful game. However, we’re a little while from the start of November 20 in Qatar. Meanwhile, brands have already started to send off their advertising efforts.

Read more: Bournvita’s Latest Ad Inspires To Understand The Difference Between Failing and Being A Failure

Among them, Coca-Cola was the fastest one to respond. Instantly, its family-centered promotion is three months ahead of the occasion. Sequentially, Beer brand Budweiser’s star-studded spot trailed not too far behind.

Let’s have a look at how the brands have to capitalize on the once in a 4 years opportunity to grab the attention of global football fans once and for all.

Coca-Cola: Believing is Magic by WPP

As anticipation builds for the November kickoff of the FIFA World Cup 2022™ in Qatar, Coca-Cola is celebrating the passionate journey of football fans through the “Believing is Magic” global campaign.

Coca-Cola was super early with this spot. In this Ad a passionate football fan walks down the street, dreaming of her team winning the tournament.

Budweiser: The World Is Yours To Take by Wieden+Kennedy

Budweiser came up with an exciting Ad featuring Lionel Messi, Neymar Jr, and Raheem Sterling. The football legends lead a group of animated fans down the player tunnels and onto the pitch.

Hyundai X BTS | Yet To Come

As a token of celebration of the FIFA World Cup 2022™, Hyundai and BTS have made an amazing collaboration. They proudly unveiled the ‘Goal of the Century campaign’s official song, ‘Yet To Come (Hyundai Ver.)’.

With the countdown to World Cup 2022, FIFA sponsor Hyundai chose the boyband for a collaboration. With this intention to promote its “Goal of the Century” sustainability campaign. In fact, the car brand is using the momentum around the Qatar world cup to spread awareness of its carbon-neutral strategy.

Budweiser: “The World Is Yours To Take” by Lil Baby

Grammy award-winning rapper Lil Baby dropped this single which is one of the eight tracks that will sound-track the occasion. It conveys the Tears For Fears hit Everyone Needs to Run the World. Further, the rapper will perform the track later this year at the Budweiser Hotel in Qatar.

The film directs a digital integration of a QR Code which lands the customer on a live raffle to win numerous jackpots, including an all-expense paid 4-day trip to the FIFA World Cup.

History will be made, records will be broken and legends shall rise at the FIFA World Cup #Qatar2022
Your journey to the greatest show on Earth awaits 🇶🇦.

Thrifty Forever: Nutmeg Royale, Pepsi’s most thrilling football film till date. With its new international tagline, “Thirsty For More,” the carbonated beverage giant has capitalized on its unmatched and well-proven ability to effortlessly blend football culture and entertainment to offer an action-packed, star-studded campaign.

Jon Hamm as Santa Claus, Tom Brady, Mariah Carey, and Ellie Kemper get you ready for the 2022 FIFA World Cup featuring the US Men’s National team including Christian Pulisic. The most wonderful time of the year starts November 20th on FOX.

With over 5.2 million players globally now experiencing the thrill of FIFA 22, more gamers than ever before are stepping into the game through early access.

FIFA 22 on PlayStation 5, Xbox Series X|S, and Stadia, powered by HyperMotion technology, combines Advanced 11v11 Match Capture and proprietary machine learning technology to deliver the most realistic, fluid, and responsive football experience, unlocking the raw emotion, passion, and athleticism on the pitch. The first-ever motion capture of 22 professional footballers playing at high intensity was made possible using HyperMotion technology. EA’s unique machine learning technology learns from over 8.7 million frames of sophisticated match capture, then produces new animations in real time to simulate authentic football movement across a wide range of interactions on the field. HyperMotion technology affects how players move on and off the ball, whether it’s a shot, pass, or cross.

The spectacular commercial opens with a bunch of scientists teleporting French soccer player Kylian Mbappe into a testing room with Brazilian superstar Ronaldinho, who has been digitally de-aged to look as he did in 2006. The scientists then reveal to the players that they have created a test to determine who is superior between Mbappe and Ronaldinho.

The film is based on the age-old dispute about who is the greatest player of all time. To honor soccer stars past and present, “Footballverse” displays the athletes’ abilities through a fictional world in which they all compete together to solve the debate of who is the best. The campaign aims to reinforce Nike’s long-held view that the future of sports has limitless potential by encouraging a new generation of soccer players to push themselves.

With the FIFA World Cup Qatar 2022 knocking at the door, Adidas releases the latest part of its Impossible Is Nothing campaign, showcasing how the love of football unites players and fans worldwide.

Rooted in football culture, World Cup memories, and tournament preparations, the world’s finest players, joined by big football enthusiast Stormzy, present their particular rituals and remind fans why this tournament is so significant. The film generates anticipation for the unlimited possibilities of the month ahead with each scene loaded with unforgettable moments, players, and venues, and is inspired by the mindset that when football is everything, Impossible is Nothing.

Frito-Lay | Is It Called Soccer or Football?

For years, fans all over the world have debated whether the sport should be named football or soccer. Frito-Lay, the first salty-snack brand sponsor of FIFA and the FIFA World Cup, is fueling the debate by bringing together a roster of global sports icons, including three-time FIFA World Cup player David Beckham and American football legend Peyton Manning, to launch the next phase of the brand’s ongoing FIFA World Cup campaign.

As soccer grows increasingly popular in North America, the business intends to make the event even more enjoyable with limited-time Lay’s globally-inspired snacks and now the FIFA World Cup campaign. Collaborating with Michael Bay, David Beckham, Peyton Manning, and this fantastic set of sports icons to have some fun with this age-old topic and remind people not to forget the chips when watching the FIFA World Cup™.

Kia’s major brand theme for this year’s World Cup is “Inspiration.” It’s in all of us,’ Kia will showcase a variety of projects highlighting the brand’s passion for the sport and its role of uniting people from all around the world in their belief that their team has a chance of reaching the top.

Every four years, mankind discovers that football is more than simply a game; it is a movement. Every shot, tackle, and second offers people hope that they, too, are capable of great things. To that purpose, Kia will premiere a campaign hero film on TV and social media platforms such as YouTube and Instagram, showing the daily lives of individuals who are inspired by the World Cup moment.

To commemorate the career of one of the greatest all-time, Lionel Messi, ahead of the FIFA World Cup Qatar 2022, Adidas released ‘The Impossible Rondo,’ the latest chapter in its Impossible is Nothing storyline. The film is a fantastic vision that football fans all around the globe will want to see the G.O.A.T competing against himself across 18 years and five tournaments, replete with his haircuts, Argentina jerseys, and Adidas boots.

The video was made using the most significant advancements in artificial intelligence and visual effects to bring the magic of Lionel Messi’s World Cup career to life. Messi’s historical and current video was combined to create distinct, younger versions of him.

The FIFA World Cup has always been a key opportunity for major brands on promoting their products and services. As it is a gigantic source of global reach and holds massive promotional potential for a brand. The FIFA World Cup captures the attention of nations to a level that overshadows other global events.

With a phase as iconic as the World Cup for brands to draw the attention of potential consumers. Hence, advertisers comprehend when their crowd will get energized and where they will be in the approach and during the games.

This content will be updated from time to time up until the FIFA World Cup 2022 final. Keep an eye on Markedium’s Website and Social Media to get updated about the best campaigns of this year’s football madness, FIFA World Cup 2022.

Hyundai and BTS Finally Released The Song For FIFA World Cup 2022: “Yet To Come”