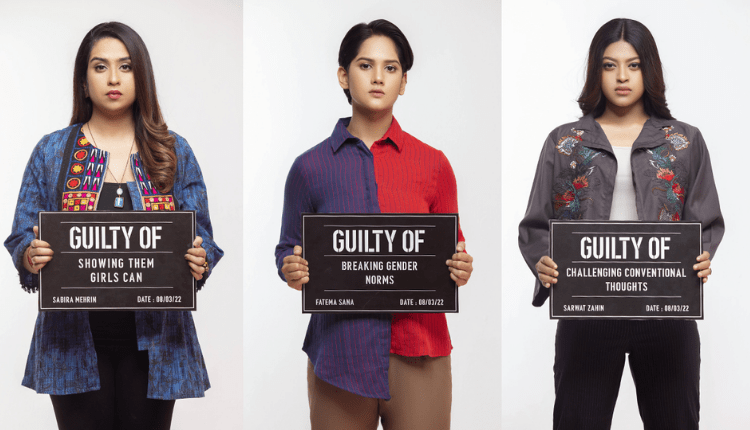 8th March, International Women’s Day implies the significance of individuality, equal rights, and equity of the women in our society. In a world that is full of opportunities, women have had to face unthinkable judgements and gender biases in every sphere and stage of their lives.

Taaga celebrates the women and their triumphs of being unapologetically themselves with a flair of unshakable confidence on International Women’s Day through their recently launched campaign on social media. Taaga lined up 7 accomplished men and women who are owning up to breaking the gender stereotype and norm by choosing who they want to be through the tagline ‘break the bias’- in a society where women’s rights are heavily mocked and ridiculed. Social media personalities like Fatema Sana, Naziba Naushin, Priota Iftekhar, Sakib Bin Rashid and more are seen to be charged with being ‘guilty’ of standing up for the rights and equality of women and daring to break societal gender norms through their respective accomplishments

The campaign leaves a grave significance in pointing out the shackles of gender biases and discriminations that are often so tightly wrapped around every action of women that it shatters the individuality and identity of countless women due to conceited societal norms against them. Whether it is women travelling alone or breaking gender norms through fashion and style or even a man supporting the women of his life to move forward and be in an equal position as men, is still fiction and considered to be gravely unconventional in our society.

The objective of the campaign is to break the stigma of gender stereotypes and norms and to roar in the face of the discriminators, that, men, and women of our society are guilty of daring to be themselves breaking all the shackles of gender-biased prejudice and judgements.

Subscribe to our newsletter
Sign up here to get the latest news, updates and special offers delivered directly to your inbox.
You can unsubscribe at any time
0 0 votes
Article Rating
2022AarongBracTaaga
Share FacebookTwitterGoogle+ReddItWhatsAppPinterestEmailLinkedinTelegramViber

Diversity for Sustainability – Unilever, and UNDP celebrate IWD 2022 by driving a plastic cleanup and awareness at NCC