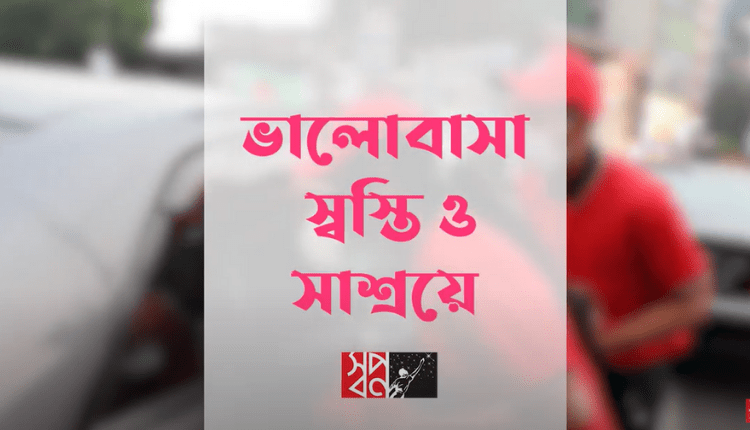 Lately, Dhaka city dwellers have been going through an extreme traffic jams in the humid weather of summer every day. It has become a struggle itself to reach their respective workplaces to start the day when the rest of day the lies ahead to deal with. In such a worrisome scenario, super shop Shwapno shared an OVC on 31st March from their social media page that showed Shwapno’s gesture of sharing red roses with city dwellers stuck in traffic. Even in such bothersome conditions, this sweet gesture brought smiles to people’s faces which instantly showed the success of the campaign without any numbers!

The city of traffic named Dhaka and its people’s charms

From the start of a busy day on 30th March, some young men and women wearing red t-shirts and caps were seen in many prime traffic signals in Dhaka. Due to severe traffic congestion, residents were stuck in signals for hours in the scorching heat of March.

Shwapno representatives were waiting on these signals and started to give red roses to the people stuck in traffic with some cheering words for rest of the day. As the day proceeded, they were seen again on the signals to greet the people returning home tolerating similar traffic and sudden rain on their way back.

It was refreshing to see how even after tolerating so many adversaries after a day’s toil, city dwellers were receiving the roses with such grace and smile. Dhaka city has certainly hidden its charms in its people!

What the campaign goal was: Groceries for Ramadan

Ahead of starting the holy month of Ramadan, Shwapno representatives also gave leaflets to them that had all the offers and discounts listed for grocery shopping for Ramadan preparation. In the OVC, people were sharing their reliability on Shwapno for their grocery needs as well. The most unique part of the campaign was that people waiting in traffic could easily check out the offers and discounts from the leaflet. One elderly person was in fact in transit on his way to Shwapno for shopping!

Throughout the last few weeks, the acute traffic situation was the talk of the town on every media platform. Utilizing such a pressing situation, Shwapno brought this spontaneous and unique approach to spreading positivity among city dwellers that deserves applause. As the OVC was captioned, our dreams must not get stalled even when the surroundings seem to get stuck. Shwapno itself showed an example of utilizing the window of opportunity instantly when it comes.

Read more: Arogga The First Startup To Get Funding From Silicon Valley’s Hyper

Shwapno shared a campaign of spreading love and cheer while promoting their service for the comfort and ease of city dwellers who were already facing hassles in everyday life. It was certainly a commendable approach from the popular super shop chain that showed how a campaign can be useful and relatable at the same time.