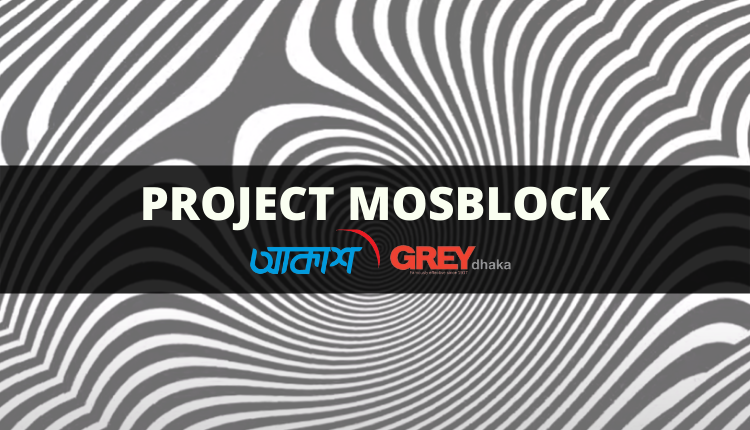 In an attempt to eradicate one of the biggest concerns of the nation in the health and disease control segment, ‘Project Mosblock’, a mosquito repellent curtain distribution was initiated by Akash DTH. Korail, one of the largest slums of the capital, MosBlock curtains were free distributed to help alleviate the mosquito-borne diseases of people living there.

Specifics of the Campaign

Direct-to-Home service provider Akash DTH of Beximco Communications Limited partnered up with Grey Dhaka, a leading advertising agency in the nation, to strategize the ‘MosBlock’ campaign to reduce the nuisance of mosquito and mosquito-borne diseases like Dengue amongst the people of slums who live in the fairly compromised state when it comes to health and hygiene. In the free distribution of a specific kind of curtains with a Zebra pattern, slum dwellers were also given training and substantial knowledge of how to avoid such diseases as Dengue.

Scientists and researchers have found that the bold black and white stripe pattern of the Zebra have successfully dazed the compound vision of mosquito making it harder for them to land on an object bearing the same pattern. Hence, the curtains act as a shield to protect every house of the slum dwellers from the infliction of mosquitoes.

Read more: Embracing the Essence of Ramadan with the Sweetness of Pran Frooto

If the year 2019 is any proof that more than 1 lac people fell into the atrocious attack of, Dengue, mosquito-borne disease and other mosquito bite inflicted diseases are a heavy health risk for the people in Bangladesh. Bangladesh is also listed as one of the top 10 countries at high risk of Dengue spread during monsoon months. And slum dwellers like Korail slums, are at high risk due to unsafe and unhygienic surroundings and extreme lack of awareness.

Campaigns like ‘Project MosBlock’ deal with impending issues which can be a potential threat to the country’s overall economy and health and safety. The demography of slum dwellers perfectly suits the campaign as those people would never buy mosquito repellents while bearing thorough misconceptions regarding the disease.

The core reason for the massive spread of Dengue and other mosquito-borne diseases is a lack of awareness and substantial action. Campaigns like these focus on the main agenda of reducing such fatal diseases and educating the people who are at high risk like slum dwellers.

The overall health and safety of the country improve with a more aware population through such campaigns. The free distribution of such innovative products also solves the issue at hand. The overall dengue rates are on the rise every year in 2021 the nation was fighting the pandemic Covid-19 and dengue spread simultaneously putting a toll on the health segment of the nation. Plus, in a country where more than half of people live below suitable living conditions, such widespread diseases can be dangerous and a huge waste of resources.

In a nutshell, ‘Project Mosblock’ combated an impending crisis in the nation and left a real impact on improving the quality of life.

Case Study: How McDonald’s Welcomed Everyone to Its Ride…