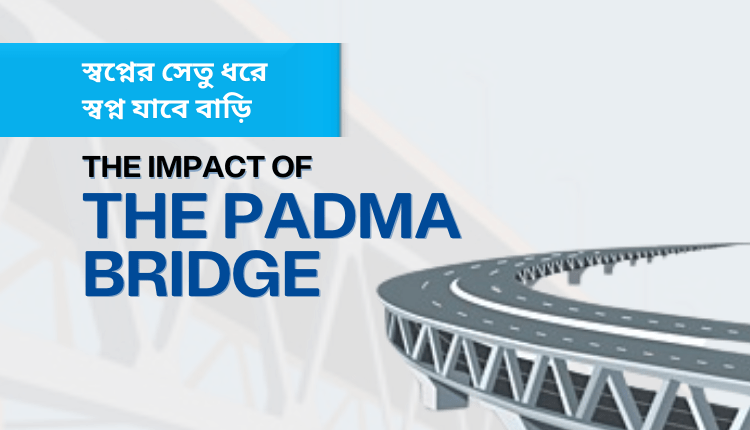 June 25, 2022, marks the historical date! Finally, the long-awaited dream of Bangladeshi Citizens is to be fulfilled with the inauguration of The Padma Bridge. And, If you are from the south-western side of Bangladesh, this bridge has brought nothing but blessings for you. We bet you already know that.

There will be no humongous traffic or horrifying patience needed for your serial to get a ferry. Now, you can at least plan for your trip with or to your loved ones without the extra burden of uncertainty.

Finally, the Padma Bridge will put an End to The travel miseries of the citizens of South-western Bangladesh.

You just have to wait till your next travel to see that dream come true and don’t worry, either ways this upcoming Eid you will taste the accomplishment of the dream or we can say this Eid-

Padma bridge is one of the most significant projects ever taken in Bangladesh. The bridge, which is 6.15 km, is the longest in the country. Establishing the infrastructure has huge socio-economic implications in the country as it will connect the north-eastern part with the 21 southwestern districts. According to LightCastle, the southwest region covers 27% of the total population of Bangladesh, which has been under the radar in terms of economic development compared to other parts of the country. The inauguration of the Padma Bridge will save significant travel time from Dhaka Division to the southwest region, which will help the area grow economically.

The Padma Bridge project, which has an estimated cost of Tk 301,933 Mn, is the country’s first independently funded mega project. Hence the bridge doesn’t only help us grow in terms of economy and shows the world the growing economic power of Bangladesh.

Ease In Travel To The Between Dhaka and South-West Bangladesh

Once again, the Padma Multipurpose Bridge is nothing but a dream come true for the citizens of South-Western Bangladesh.

According to a report by Asian Development Bank, Padma Bridge will save significant travel time between the Dhaka Division and the southwestern region of Bangladesh. Travel time will be reduced by 2 hours for cars and buses and over 10 hours for trucks. Hence the bridge will reduce transportation costs and is expected to bring structural changes to the southwestern region.

Reduction in travel time is not even the biggest issue that the bridge is solving here, it’s the hassle around it. The uncertainty of traffic and waiting time for the ferry to cross the mighty Padma! Adding on the travel time to cross the river by ferry and also the number of ferries available to accommodate all the vehicles weren’t enough to make the journey a good one for the travelers.

And this Eid, thanks to the inauguration, travelers won’t have to go through the hassle anymore.

According to an article in The Business Standard, the opening of the Padma Bridge will save a total of Tk 438 crore per year for all transport due to the rise in speed. If the waiting time of the ferry is taken into account, then the total time saved is valued at Tk 1,118 crore per year. Moreover, reducing travel time will allow native people working in Dhaka Division to have less time spent on the roads and more time with their families when traveling home.

Padma bridge has enormous economic implications for the country. According to an article in The Financial Express, the bridge’s Benefit-Cost ratio studied by Maunsell was 1.6%, and the Economic Internal Rate of Return was 18%. In other words, bridge construction is expected to be economically profitable for the country. The bridge is expected to reduce travel time with Dhaka Division by 2 to 4 hours. It will allow ease of logistic transportation from the southwestern region. This will cut costs for the existing businesses in the area as it will take less time to transport goods from the region. Hence there will be a new industrial wave in the region, allowing more employment opportunities for the local people.

According to LightCastle, the population below the poverty line is 5% higher than the rest of the country due to the lack of an effective communication network. The growth in Industrialization will allow reducing the proportion of poverty in the southwestern region. According to an article in The Financial Express, the mega project’s overall economic impact will grow the south region’s annual GDP by about 2% and the overall GDP of Bangladesh by more than 1%.

The southern part will connect Trans-Asian Highway (N-8) and the Trans-Asian Railway. Hence it will not only increase business within the country, but the bridge will allow expanding international trade. The connectivity with the Trans-Asian Highway and Railway will enable Bangladesh to have global connectivity with India, Bhutan, and Nepal. The country relies on Chattogram port as most of the international trades happen through the port. The bridge will allow direct links between the two major southern seaports: Mongla and Payra ports. Hence the direct link will reduce the pressure on the Chittagong port and enable optimal utilization of the southern region ports. Investment in the region will increase as industrial parts, and EPZs will be established to utilize the resources of the southern region.

With Industrialization, the southern region people will be better off financially as the land prices are expected to increase. Tourism is also likely to increase with the ease of transportation after the bridge’s inauguration. Small business is also likely to rise, which will grow the entrepreneurial environment in the region.

Tourism Sector To See A Boost

According to the Bangladesh Bureau of Statistics, the country’s economic growth will double in one leap due to the construction of the Padma Bridge. Reportedly, entrepreneurs in the tourism sector already had their share of investments done on both sides of the bridge indicating probable inclusion of tourist destinations. We might find resorts, boutique hotels, recreation parks, etc. in the southwest part of Bangladesh as well which was quite impossible due to the earlier travel time consumption.

Additionally, the government has reportedly also made various plans for the development of the tourism industry centering on the Padma.

However, proper planning with execution is required every step of the way!

Undoubtedly, the inauguration of the Padma Bridge is an incredible achievement for the country. The potential for socio-economic growth is significant, and the people of Bangladesh should be excited about the prospects the infrastructure will bring.

Case Study: How McDonald’s Welcomed Everyone to Its Ride…

The Proposed Budget Likely To Encourage The Refrigerator…