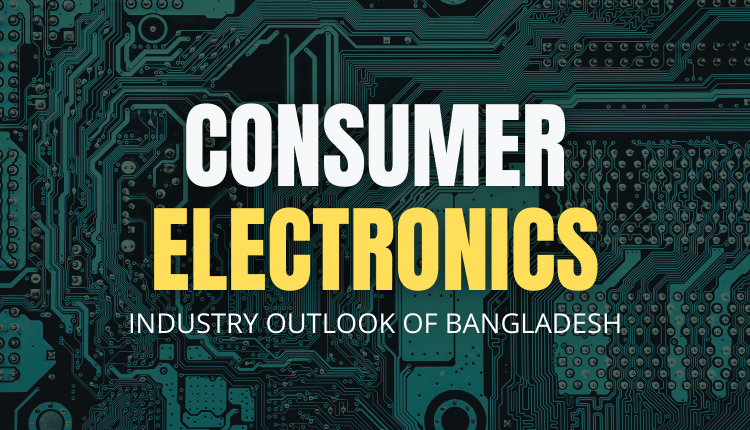 Bangladesh’s consumer durable industry- a combination of both the consumer electronics and consumer appliance industry, has seen significant growth in recent years and played a vital role in growing the economy of the country.

Here in this article, we tried to come up with an understandable outlook of the industry based on the recent yet little information that is available in the public domain.

According to UCB Asset Management Ltd, the Bangladesh Consumer Durable industry has seen a brilliant CAGR of roughly 14% in the years 2016-2020 and as of October 2021 stood at USD 2.35 billion. The report also suggested that the market size is expected to reach the USD 10 billion mark by 2030 if the industry grows at a rate of a CAGR of 17%.

To reduce the complexity of the report and based on the low availability of the data, UCB Asset Management divided the industry into 4 segments: Refrigerator, AC, Television, and Home Appliances.

The consumer electronics industry of Bangladesh has been one of the frontrunners recently which is driving the growth of both the economy of Bangladesh and the living standard of the population to whom affording an electronic product was considered to be a luxury even a decade earlier.

For this impressive shift, all credit goes to the relentless willpower of local companies to meet the local demand and the helpful policies from the Bangladesh Government in favor of motivating the electronic manufacturing industry of Bangladesh.

In fact, among the 4 mentioned categories above, Bangladeshi Electronics giant Walton is currently leading the market in 3 of the category.

Bangladeshi home-grown companies like Walton, Jamuna, etc. are not only just meeting the local demand by maintaining the high-quality product at an affordable price, but have also started to reduce the pressure on the RMG sector regarding earning foreign currency through exports. The current numbers might be insignificant till now but carries the utmost potential to become one of the major revenue earning source for Bangladesh.

About a decade and a half ago, the local demand for electronics products was met by the imported goods. Now the local brands have proved their capacity and capability in capturing the majority of the markets by overcoming the foreign brands’ complete dominance in Bangladesh.

The government of Bangladesh also is in favor of creating enough possibilities for in-house manufacturing for the goods that can be made locally to reduce the pressure on importing or the foreign reserve.

According to the Export Promotion Bureau,

Already domestically manufactured electronics goods are being exported to more than 40 countries of the world. The exportable items include compressor and its components, refrigerator, television, air conditioner, home appliance, mobile phone, laptop, etc.

The industry has been one of the major flagbearers of the “Made in Bangladesh” motto to represent Bangladesh on the global stage and the response around the globe is overwhelming as well.

With the utmost potential to become one of the major driving forces of the country’s economy, the Electronics Industry has seen sheer success recently in terms of both meeting the local demands and exporting to spread the Made in Bangladesh motto.

Here are some major growth drivers that have worked in favor of such growth:

Hence, the more the income is increasing for the people, the more people will be able to afford products from the consumer electronics industry.

Read more: MFS Industry Of Bangladesh: Bringing Easy Access To Finance To Many

Another major growth indicator of the industry is the growing trend in the Middle and Affluent classes (MAC- monthly household income of around $400 or greater). According to a study by BCG, the MAC population of Bangladesh is expected to reach 34 million by 2025 which was 12 million in 2015.

As a result, rapid urbanization is in effect in Bangladesh which is leading to the increasing demand for electronics goods due to changing lifestyles and living standards.

The infrastructural development in Bangladesh has played a vital role in enhancing the Electronics and Electrical industry of Bangladesh as a whole. For instance, electricity coverage has played a key role in accepting the consumer durables as a product of want for the rural part of Bangladesh. Adding on,  the continuous commitment from the local brands to make the appliances affordable for the same region has hyped the demand for electronics goods at its peak.

The government has always been the frontrunner in promoting the local homegrown electronics manufacturing industry with various industry-friendly policies and flexibilities to encourage more and more entrepreneurs to invest. Since the local electronics manufacturing industry carries the utmost potential to drive the economy of the country and also reduce the pressure from both the RMG sector (earning foreign currency) and importing (reducing pressure on foreign reserve), the government should keep on going to help the stakeholders.

Only then we can hope to see a self-sustaining homegrown Electrical and Electronics industry, here in Bangladesh which will be thriving to shine in the global aspect as well.

Read More: Case Study: How McDonald’s Welcomed Everyone to Its Ride Thru

The consumer electronics market in Bangladesh is on the rise for Bangladesh. The homegrown brands are making a mark on both meetings the local and global map by producing high-quality, global standard products. The sector is poised to hit the USD 10 B market cap by 2030. Moreover, the supporting industries are also growing and so does the new market channels. With the growth of e-commerce, MFS will also play a vital role in developing the local electronics industry in the upcoming future. Numbers are working in favor, the projection is also stating the same. Hence, the industry only requires assistance from the Government and trust from the local audience.

If everything works as it should be, probably the day is not far when Bangladesh will also be synonymous with one of our homegrown electronics brands that will be excelling in the global arena.

Caring About The SDG Goals Is A Must To Win The Future Customers, Here’s Why