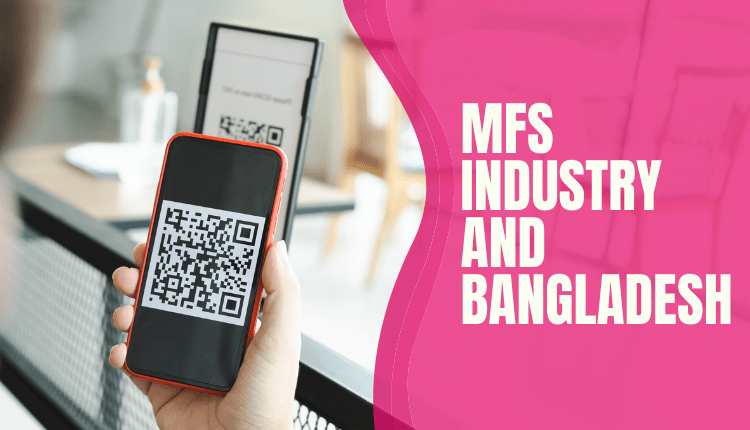 MFS Industry Of Bangladesh: Bringing Easy Access To Finance To Many4 min read

In Bangladesh, the banking industry mainly dominates the financial landscape by providing various services. However, the poor people still didn’t have any access to financial services. Seeing the demand for a more straightforward and easily accessible solution for poor people Mobile Financial Service (MFS) industry grew in Bangladesh.

Bangladesh Bank published MFS Guidelines on 22nd September 2011 for the first time and later revised the same in December 2011. According to the guideline, the central bank permitted two ownership structures: 1. As a bank wing or 2. As a subsidiary where a bank holds a 51% partnership. According to CGAP, Trust Bank started the first MFS in Bangladesh, but it did not sustain itself in the market (although it returned with Trust Axiata Pay in May 2020). Then Dutch Bangla Bank, Brac Bank, Mercantile, and Bank Asia established mobile financial services (as a bank wing or as a subsidiary like bKash) from 2011 to 2012. The industry did not look back as the people started using the services in large numbers.

Current Scenario in the MFS Industry

According to the statistics of Bangladesh Bank, there are 13 banks currently providing MFS services as of February 2022. The number is in a declining trend as there were 17 banks providing MFS services in December 2016. The number of agents has grown by 61.7% from 0.7 million agents in December 2016 to 1.1 million agents in February 2016. The number is clearly an indication of wider the wide distribution network created by the MFS providers.

The Impact of the MFS Industry In Bangladesh

As of late, Bangladesh has seen a quick development of digitalization, which is gradually changing the state of the country’s financial boundaries and pushing it towards digital transformation, and the MFS players in the industry are working as a driving force in this massive shift in lifestyle.

The sector is also playing a vital part in transforming the Government’s vision of transforming Bangladesh into a digital economy by revolutionizing the traditional money transaction process and providing scope for improving living standards.

The pandemic has shown us how MFS has supported the whole ecosystem when it needed the support the most. During the pandemic, the government’s crisis management tactics were significantly supported by MFS services. Millions of readymade garment workers received their salaries and other incentives through MFS during the lockdown resulting in reportedly 2million+ MFS accounts opened by the RMG workers. The impact of MFS is also similar to the distribution of government severance packages and supporting the education industry with student tuition fees distribution and etc. Around 13 million primary-level students reportedly get government stipends amounting to a total of Tk 4,000 crore through MFS.

The momentum of the MFS industry is likely to continue as people as adapting quickly to the system. As most people use mobile phones MFS is a more accessible and convenient service for many. And as smartphone usage grows in the country it is expected the usage will not be only limited to transferring money. People are likely to keep up using it for every type of payment, shopping, savings and even taking loans. The possibility of the MFS industry is endless. As the competition is rising in the sector, the consumers will enjoy the benefits.

The Proposed Budget Likely To Encourage The Refrigerator Assembling Industry, Raising Concerns About The Full-Fledged Manufacturing