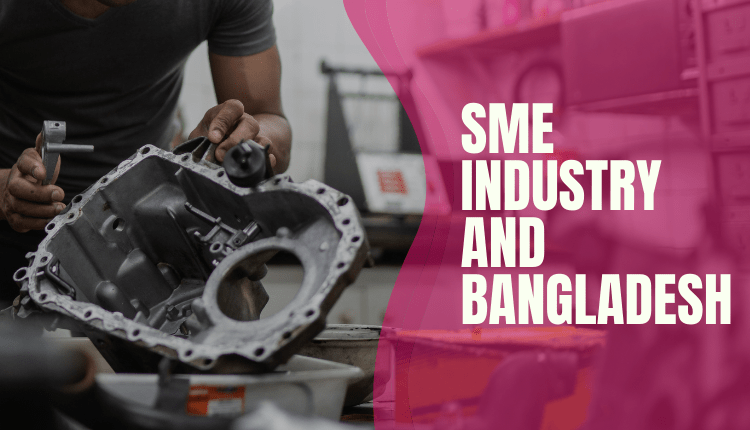 The small and medium-sized enterprise (SME) industry in Bangladesh is the critical driver of the national economy in Bangladesh. The overall industry is comprised of Cottage, Micro, Small, and Medium enterprises. The majority of the SME industry (about 98.5%) belongs to the Cottage and Small industries. Cottage enterprises are businesses with an investment of up to Tk 0.1 million except for land and building and employ about 15 people. Small Enterprises require investment from Tk 7.5 million to Tk 150.0 million.

Read More: IPDC and Amal Foundation Joined Hands To Solve Bangladesh’s One Of The Core Problems

Contribution to the Economy

SMEs occupy a vital position in the national economy of Bangladesh. According to a report by the Planning Division, the industry accounts for about 45% of manufacturing value addition, 80% of industrial employment, 90% of total industrial units, and about 25% of the labor force in Bangladesh. The contribution from export varies from 75% to 80% of the total earnings. SMEs also contribute considerably to the industrial sector, which makes up 31% of the country’s gross domestic product (GDP). According to an Asian Development Bank (ADB) report, the SME industry employs 70%-80% of the nonagricultural workforce. In 2014, SMEs contributed to about 25% of Bangladesh’s Gross Domestic (GDP) and 40% of the country’s manufacturing output.

The industry’s manufacturing sector, primarily comprised of Micro, Small, and Medium Enterprises (MSMEs), was the main contributor to Bangladesh’s economy in 2014. According to a survey conducted by the Bangladesh Bureau of Statistics in 2012, there were 42,792 active manufacturing units, out of which 40.6% were micro-enterprises, 36.6% were small enterprises, and 14.3% were medium-sized enterprises.

Contribution to the Employment

The SME sector contributed 1.5 million jobs from 2009 to 2014. The total number accounts for 80% of industrial employment and about 25% of the entire labor force in Bangladesh. The sector is a significant contributor to most of Bangladesh’s population, especially the new entrants in the job market.

According to a report by the Planning Division, about 60% to 65% of SMEs are all located outside the Dhaka and Chattogram metropolitan areas. Hence SMEs can play an essential role in reducing the urban migration in the capital and major cities in the country. As most industries are established in rural areas, the industry is playing a significant role in increasing the standard of living of the rural people by creating employment opportunities.

The SME sector is considered a promising sector to reduce poverty by creating new employment opportunities and thereby addressing the significant portion of SGDs.

According to World Bank, Bangladesh has a $ 2.8 billion financing gap in the MSME sector. 60% of women-owned SME enterprises don’t receive any funding, mainly due to a lack of collateral. A single policy for the industry with a systemic plan was missing for enhancing SME finance. The creation of SME policy 2019 will play a pivotal role in easing access to financing for the overall industry.

In recent years, Banks and Non-Banking Financial Institutions (NBFIs) have seen the financing gap as an opportunity and have started to focus more on financing the SME enterprises. IPDC is one of the renowned NBFIs which has increased its SME portfolio considerably in recent years. According to the 2021 Annual Report of IPDC, the SME & Emerging Corporate portfolio stood at Tk 20,198 million in 2021, which is 30.9% of the company’s total loan portfolio. The portfolio increased by 2.4 times compared to 2017. Since 2018, the portfolio is grown in double digits, which shows the potential in the sector and how an NBFI like IPDC is contributing to the sector’s growth.

The SME Policy 2019 announced in September 2019 is expected to play an essential role in changing the country’s SME scenario. The Ministry of Industries (MoI) has prepared the policy, which will remain effective until June 2024.

The policy has been prepared in line with the country’s Vision-2021 and Vision-2041 to achieve graduation of least developed country (LDC) status by 2024 and UN Sustainable Development Goals (SDG) by 2030. The policy aims to increase the contribution of the SME sector to Gross Domestic Product (GDP) from 25% to 32% by 2024.

The policy emphasizes extensive SME development activities. One of the policy objectives is to improve the SME business environment by increasing institutional funding, adopting ICT-based technology, developing marketing strategies, and establishing SMEs as the backward linkage of large industries.

The sector is proving to be a powerhouse in terms of GDP contribution and employment generation in Bangladesh. The government’s focus on the industry will only benefit the industry, contributing to its population’s GDP and the living standard. The industry is also getting a high interest in financing as many Banks, and NBFIs are increasing loan advances for the sector. If more helping policies are implemented and the industry’s financing need is met, the SME industry will contribute even more significantly to the country’s economy.