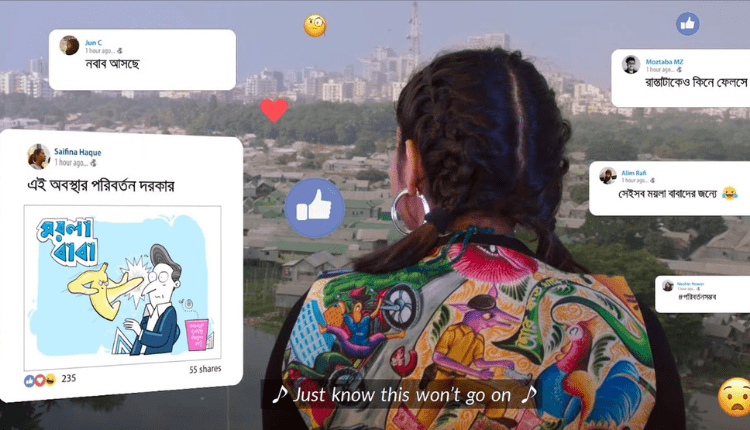 The internet has revolutionized the lives of people all across society, in both good ways and bad. On one end, the internet brings the world to the palm of our hands. From connecting people to being a storehouse of global information; the internet serves as an integral part of our lives. On the other hand, the internet can also be a source of hostility and insecurity for many. Regardless, the internet has the power to influence our lives, bringing change in both ways. Grameenphone agrees!

The telecom giant believes that the internet has the power to create more positive changes than negative ones. In their latest campaign, Grameenphone pledges to ignite change against social problems with the power of the internet.

Each of the aforementioned scenes ends with a strong, empowered woman sketching in her diary. She is witness to these social problems, and as she faces scrutiny, ignorance, and narrow-mindedness, she caricatures these people in various names. From ‘Comment Khala’ to ‘Moyla Baba’; the pseudo names are absolutely hilarious.

In the background, we hear an upbeat chorus of women raising their voices against the current social construct. The message is simple; this is a new era; we are not going to stay silent anymore. We are not underneath you anymore. We are free and independent.

Grameenphone outdid themselves with this empowering campaign. In 50 seconds, the campaign managed to create an incredible impact, voicing against traditional social constructs. Furthermore, the campaign creates a stunning Call to Action for the website. On the landing page, we see stickers under the campaign title ‘Change is possible with the power of the internet’.

The campaign focuses on the most common social problems that we currently experience. In the 50-second advert, the visuals take us across three different spectrums of social problems.

The first scene sees a girl being subject to random comments inside a bus by another woman passenger. This scene reminds us of the narrow-minded mentality of many people against the freedom of women in the movement.

The second scene is arguably the most relatable; a guy throwing a banana peel on the open road. Here, the campaign focuses on the ignorance of many who pollute the streets with reckless waste disposal.

The final scene is arguably the most powerful scene in the campaign.

‘Do you allow your daughter to go out the night?’; a common question for many parents in Bangladesh.

“Yes, they do. They also let me breathe.”

What are your thoughts on Grameenphone’s latest campaign? To get more updates, stay with Markedium.