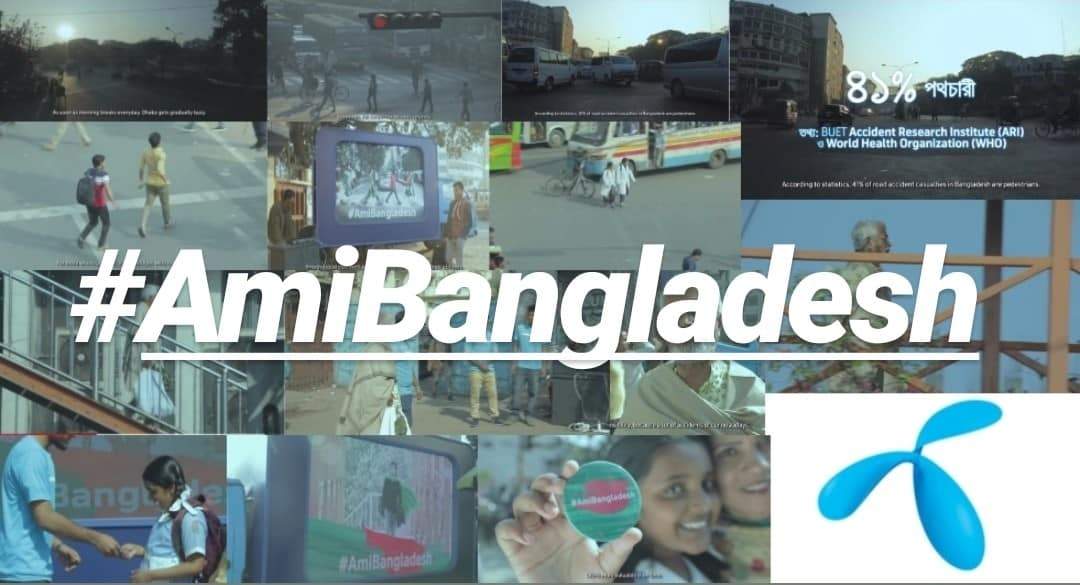 “Together We Can Create A Safer Bangladesh”-Grameenphone2 min read

Grameenphone initiated a much-revered social campaign regarding road accidents. The ad is tagged down as #AmiBangladesh. The TVC aims to create a better city by diminishing road accidents. It pays significant homage to the ones who abide by the traffic rules. And who wouldn’t love to have a safer Bangladesh?

Road accidents are one of the most common attributes of our country. This is pathetically true that it occurs due to two prime reasons. Firstly, the reason is certainly the recklessness of transport drivers. Secondly, the unwary attention to traffic rules and not being careful enough. Grameenphone made a social experiment at some certain roads.

Read More: Bangladesh through our eyes – A Grameenphone Masterpiece!

The experiment helped to witness the casualties of pedestrians on a typical busy day. Neglecting the foot over bridge the majority rushed to cross the roads while all the transports were running along. However, there were a handful of people who crossed the occupied streets by using the bridge. Grameenphone named these people as ‘disguised superheros. With the help of a projector they delineated a superhero cape in the photographs of those people. The photo was tagged as #AmiBangladesh.

It’s a wonderful initiative to make everyone sincere to their responsibilities. As a civilian of Bangladesh, it is certainly our duty to abide by traffic rules. The roads and streets of our country are shallow and busy throughout weekdays. Road accidents are increasing at a rapid pace. The consciousness and conscience can turn out to be milestones to prevent road accidents. The only purpose in the life of a fictional superhero is to build safety for everyone by creating a safer Bangladesh for all. Thus, we all can make use of this motive and be our very own superhero to ensure a safer and better city.

Uber Saudi Arabia: For The Women, By The Women