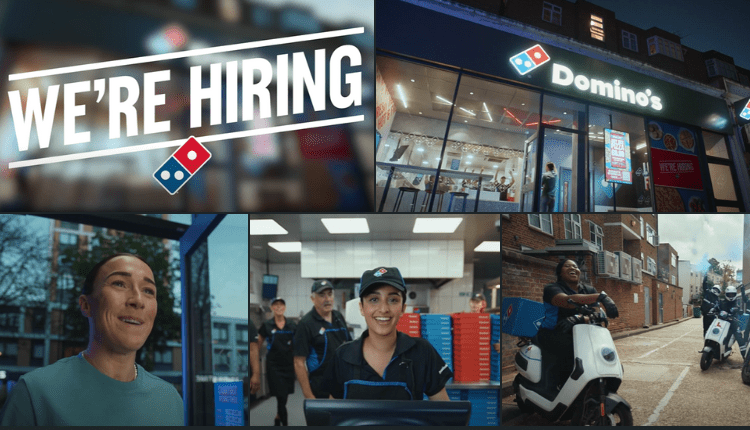 Domino’s Pizza: Welcoming 10,000 Recruits With The Symphony Of The Football Anthems3 min read

The whole world of football fans is going to indulge a the Fifa World Cup kicks off in Qatar on November 20, 2022. For this time of celebration, your favorite pizza chain Domino’s has come up with an innovative approach to connect football fans worldwide. Hence, the global fast food chain is recruiting a private army of 10,000 drivers for their work-friendly environment. Besides, more store staff and pizza chefs to ensure it is ready to cater to a huge load of orders.

Read more: Bournvita’s Latest Ad Inspires To Understand The Difference Between Failing and Being A Failure

People usually eat pizza during a sports game, particularly at home. Normally, people watch games in the living room on a widescreen television. Hence, Domino’s is ensuring it is oven-ready for the expected higher demand for pizza this winter. As the world cup and Christmas, both occasions knocking at the door, they are preparing themselves to keep pace with the surge in demand.

Pizza and football are a natural pairing. There are good reasons why people globally love to have pizza delivered during a game. Especially,  when it’s winter who doesn’t love a warm slice of pizza? Whether it’s sports or a movie, having certain foods like pizza has become a tradition. By the same token, Domino’s pizza merged football club tunes and chants to welcome their new recruits and consumers in this season of celebration.

For instance, the ad starts with a lady singing the Manchester United FC theme song “Glory, Glory Man Utd”. This song has a legacy over generations. Metaphorically, it connects a few dots too. As per the ad, it shows the unity of the worker, further, the unity of people globally based on soccer. Also, it may portray the tradition of eating pizza while watching a football game.  In a scene, Domino’s dubbed ‘Pitch Perfect,’ created by communications agency One Green Bean. With an intention, to drum up interest amidst a labor shortage by rendering fan football chants with pizza-related lyrics.

Most importantly, the  60-second indicated great consciousness considering a crisis in hospitality recruitment. Especially, the company is focusing on people willing to take on a second job to support their finances amid rising inflation. In fact, as per Domino’s poll, 28% of people in the UK are ready to sacrifice their leisure time.

Read more: Case Study: How McDonald’s Welcomed Everyone to Its Ride Thru

Globally, Football brings people together. Watching sports together is an excellent community moment. It creates an opportunity for friends and family to bond over a common interest. Besides, watching sports also breaks the ice and helps people get to know each other better. Yet, no community gathering is complete without a meal. To me, the best meal you can serve that almost everyone likes is pizza! In the world of football, everyone is a winner because ultimately football wins for the love of the fans as a whole. Likewise, Domino’s Pizza is welcoming you to join their united workforce which they call it “The Winning Squad”.

After Two Years, She Loves Tech 2022 Bangladesh Cohort Was Carried Out Successfully In Public