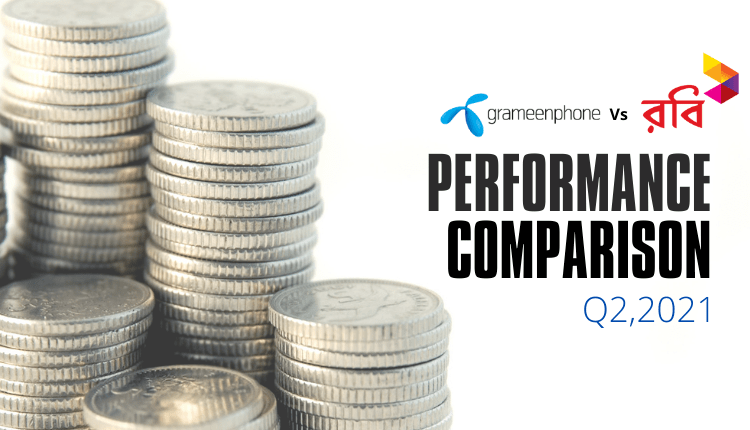 The two telecom giants in Bangladesh have posted their quarterly statement for the period April’21-Jun-’21 period. Total revenue of Grameenphone and Robi for the 2nd quarter of 2021 was Tk 35,763 million and Tk 20,309 million respectively. Despite the huge difference in total revenue, there has been a rivalry going on between the two companies to win the data consumption battle. It is now well known that the telecom industry is facing a shift from voice revenue to data revenue. Voice revenue which is the main revenue contributor for the telecom companies is declining mainly due to the increasing use of OTT platforms like WhatsApp, Messenger, IMO, etc. 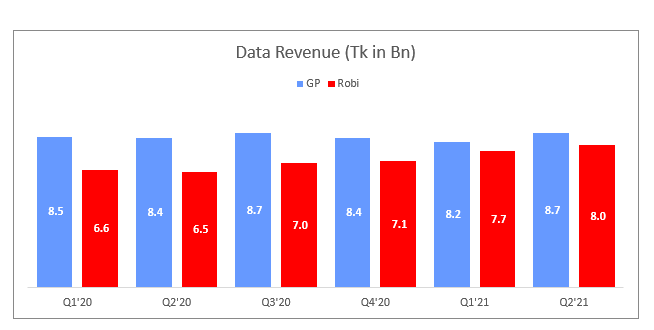 Till Q4’20, Grameenphone’s data revenue per user was higher than that of Robi. However, Robi is now ahead in this metric for two consecutive quarters. This is mainly driven by the success of Robi to increase the consumption of data per user. In Q2’21, internet consumption per user for Robi was 3,999 MB whereas Grameephone’s was 3,609 MB.

In a recent press briefing, Robi’s CEO expressed dissatisfaction over the control of a single largest player in distorting price and distribution system. He also was worried about the lack of implementation of the SMP regulations. Grameenphone was declared as a Significant Market Player (SMP) in February 2019, but the regulation has not been implemented on the company yet. Mobile internet penetration still has a lot of scopes to grow, and we expect the intense rivalry of the two telecom giants to continue in the coming quarters.

Prev Next
Subscribe to our newsletter
Sign up here to get the latest news, updates and special offers delivered directly to your inbox.
You can unsubscribe at any time
0 0 votes
Article Rating
202121AugustBrand TrackGrameenphoneQ2Robi
Share FacebookTwitterGoogle+ReddItWhatsAppPinterestEmailLinkedinTelegramViber

Uber reported a profit of $1.1 billion