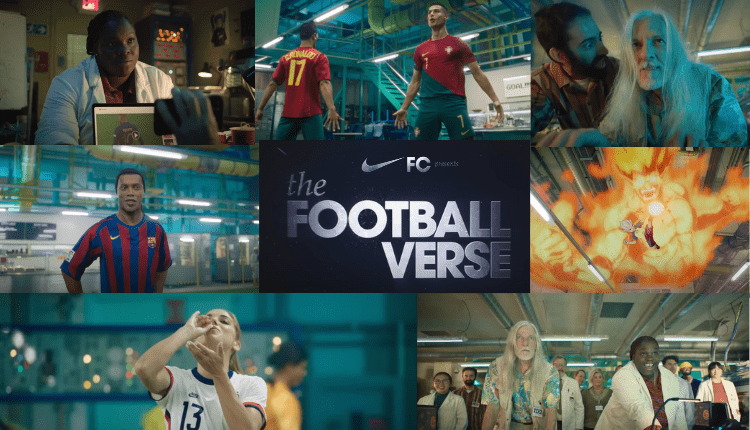 Nike’s New Footballverse AD Unites The Footballers From The Past, Present, And Future2 min read

Nike has assembled footballers from the past, present, and future for a star-studded latest World Cup campaign. And, it was out of the world.

The film is based on the age-old dispute about who is the greatest player of all time. To honor soccer stars past and present, “Footballverse” displays the athletes’ abilities through a fictional world in which they all compete together to solve the debate of who is the best. The campaign aims to reinforce Nike’s long-held view that the future of sports has limitless potential by encouraging a new generation of soccer players to push themselves.

In the beginning, a group of scientists invents the concept of converting their lab into a vast football arena into which they can bring the players to play against one another. Along the process, one of the scientists brings in his uncle, which adds to the hilarity. The lab then transforms into a full-fledged football match, with each participant displaying their abilities to Oingo Boingo’s 1985 classic “Weird Science.”

The spectacular commercial opens with a bunch of scientists teleporting French soccer player Kylian Mbappe into a testing room with Brazilian superstar Ronaldinho, who has been digitally de-aged to look as he did in 2006. The scientists then reveal to the players that they have created a test to determine who is superior between Mbappe and Ronaldinho.

Read more: BINGE’s Latest Campaign Urges Us All To Reshape Our Thinking Process

The film portrays Nike’s long-held conviction in the boundless possibilities of sport and encourages a new generation of footballers to prove it. Simply said, the game is never over.

Football fans can also participate in the campaign by visiting a Footballverse experience in Nikeland on Roblox, where they can compete against their friends in the Nike Cup Clash.

The “Footballverse” is merely one element of Nike’s overall ambition of bringing soccer to the foreground of diversity and culture. The brand’s new 2022 men’s National Team line of jerseys and shorts, which features a contemporary Dri-FIT design, is a popular trend this season.

By showcasing incredible Nike players from the past and present, ‘Footballverse’ demonstrates how each generation of players leaves their signature on the game, enriches the sport, and inspires future generations to do it as well.