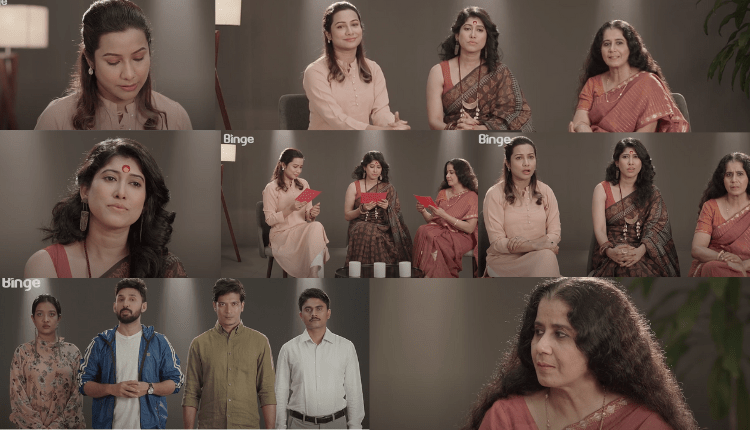 What we see and hear around us shapes our thinking world. However, there are countless things beyond our limited horizon that we may never address. Yet, there are various issues in society that we must consider. They should be given the same value as everything else. In this regard, Binge rolled out a social experiment to enlarge the spectrum of our thoughts.

Let’s Jump into it, shall we?

Before we begin, what was your first impression when you saw the mentioned campaign “Chintay Ashuk Poriborton”?

I bet you thought it has something to do with women’s welfare or maybe to address the stigmas that they usually face due to our judgmental society, and that impression grew even stronger when the ladies in the clip started reading the stories from their individual flash cards.

Because, why not? When it comes to not having children within a few years of marriage, the woman is frequently blamed. Who would have thought that a man could hear the same thing from society?

In the second narrative, a guy harasses a child while his or her parents leave him with a neighbor, believing he is secure. Because it’s nearly impossible for us to comprehend that a man might be sexually harassed as well.

And, sexual harassment in the workplace is not a new phenomenon for women, nor is it restricted to any one culture, area, or society. Sexual harassment is and has been happening for as long as anybody can remember. In the workplace, a woman is frequently subjected to such a stereotypical act of violence. Sometimes their employers, senior coworkers, or even colleagues touch them with sinister motives, even offering to get laid with them. Otherwise, there will be no promotion, no raise, and lastly, no employment. However, we tend to believe that men are immune to all of these dangers. Well, are they?

Which begs the question, why don’t we consider men to be victims of such social harassment?

Because it is astonishing to discover that men are sexually harassed at the same rate as women in our society. The tragic aspect of this remark is that it is frequently neglected in our culture today. Because of social perceptions of power, stereotypes, and masculinity, most people do not think that males can be assaulted, and they forget that sexual assault may happen to anybody, regardless of age, sexual orientation, or gender identity.

Men and boys who have been sexually raped or abused have the same sentiments and emotions as other victims of sexual assault. As a result, their well-being and ideas are of the utmost significance, and their voices should not be disregarded, but rather heard, in order to assure that proper actions are done to end this abuse.

As a result, Binge launched the “Chintay Ashuk Poriborton” or Let our minds be changed campaign. Although it is extremely unpleasant for women to report sexual harassment, it is even more embarrassing for males to disclose this to society. Because women are more likely to receive compassion from others, on the other hand, males are terrified of becoming an object of amusement if they share it.

But, surely, someone has to be the whistleblower. And Mr. Muntasir, who experienced such harassment, shared his story in order to stand for other guys to confront and remove the problem. Because, just like women, the impact of such events on males can be catastrophic.

One of International Men’s Day’s key aims is to raise awareness about male suicide. Furthermore, the day intends to cover a wide range of themes related to men’s mental health. In addressing the aim of the day, Binge brings up a campaign that we as a society seldom consider.

So, in honor of Men’s Day, let’s hear something we don’t often hear. Let us extend our horizons. Let us remove the adverbs “usually, generally, mostly” from our thought process and think rationally. Let’s join The #TEAMMUNTASIR in addressing the guys as well. And may our thoughts be changed!