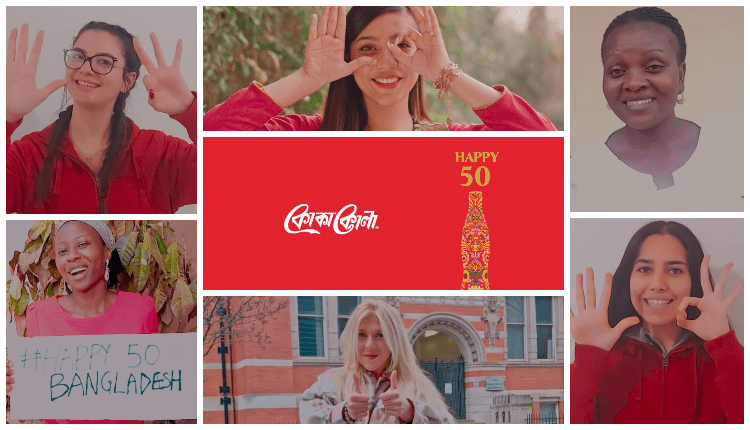 March 26, this year marks the 50th Independence Day of Bangladesh. To commemorate the occasion of such pride, Coca-Cola Bangladesh launched a highly innovative and engaging campaign titled #Happy50Bangladesh to share our pride on a global scale. Indeed, a Coca-Cola-like campaign in Bangladesh after long.

So, what was the campaign?

Coca-Cola simply created an opportunity for the world to wish Bangladesh to mark its 50th Independence Day and the impact is contagious. Ever since Coca-Cola has started this campaign, the internet is flooded with responses from all over the world. Hundreds of Wishes from numerous parts of the world just showered Bangladesh with utmost pride and joy.

Coca-Cola’s #Happy50Bangladesh has created waves across the internet. Not only have citizens of various countries sent their videos, but there have also been wishes from global and local celebrities including famous West Indies cricketer Andre Russel, youth icon Iftekhar Rafsan, actor Siam Ahmed, and more. One cannot help but be overwhelmed by so many people’s wishes and loves from many countries like Turkey, South Africa, Panama, Nigeria, Cambodia, and many more.

Furthermore, it has been a brilliant utilization of globalization. The brand has achieved stellar engagement from its audiences. Simultaneously, Coca-Cola firmly reestablished its core value of celebrating everything in life while also finding happiness among each other.

Read More: GRAMEENPHONE IS NOW A FAMILY OF 8 CRORES SUBSCRIBERS

An excellent campaign by Coca-Cola with jaw-dropping results and probably the best engaging campaign for this year’s Independence Day by a Bangladeshi brand. Coca-Cola is always known for its mind-blowing campaigns around the world, and thankfully this time the fame came true for Bangladesh.

How do you feel about this campaign by Coca-Cola? Let us know at Markedium!