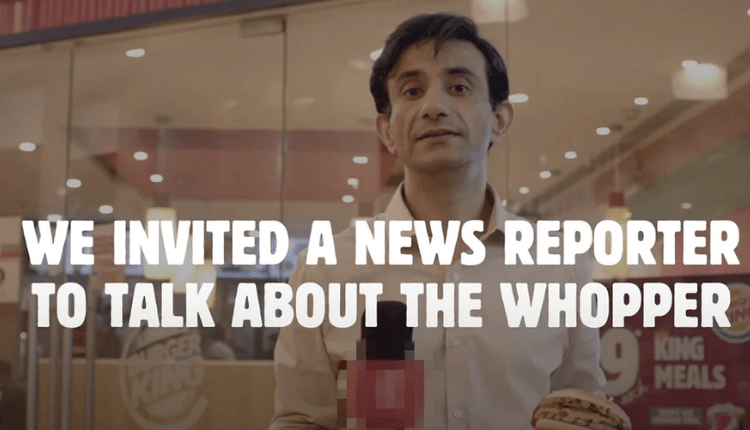 One of the most misleading and controversial sources of producing twisted information is yellow journalism. Every day, news reporters seem to be shifting focus from authentic news to sensational reporting. Although it is useful in generating hype, it is unethical and deprives people of knowing what’s happening. Burger King seems to understand that and took a gutsy stance against it through their #AgainstSensationalism campaign.

The campaign starts with Burger King inviting a journalist to talk about their Whopper. However, instead of focusing on its traits, the man drones off into a loud monologue. His aggressive tone and serious voice feel too satirical to consider his news authentic. With a comical TRP indicator on the bottom of the advertisement, viewers will have a good laugh.

Initially, the #AgainstSensationalism campaign might feel like a commercial comedy skit. However, on further inspection, it’s easy to realize that Burger King has sent out two strong messages through this one advertisement. First and foremost, it takes a clear stance against yellow journalism, a heinous act of lying and fooling the masses. At the same time, it sticks to its core value by uplifting the Whopper and declaring its supremacy. Even amidst the sputters and shouts, it is clear that no burger is worthy of comparison to it.

It is a rare case that we can find a fast food advertisement with such depth and complexity. Burger King not only used humor to imprint this campaign into the audience’s hearts but created awareness simultaneously. This campaign shed light on the fact that yellow journalism is a faulty and wrong practice. At the same time, it also sticks to its core values by maintaining the Whopper’s supremacy.

A funny advertisement with a vital agenda, this campaign is something you will not be forgetting anytime soon!

What do you think about Burger King’s recent campaign? For more updates, be sure to stay with Markedium!