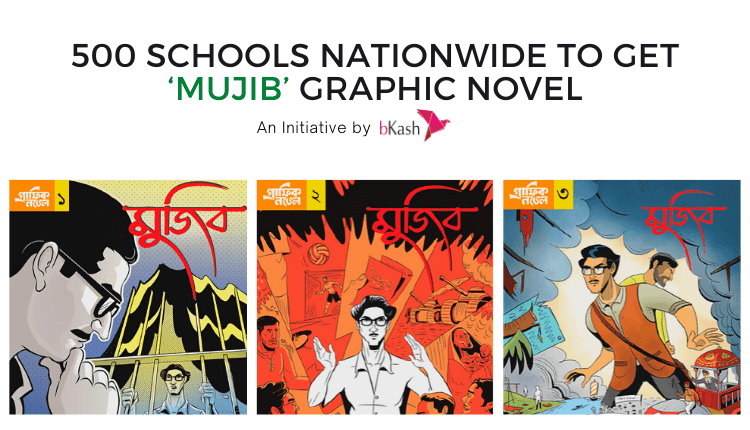 bKash will distribute 20,000 copies of the graphic novel ‘Mujib’ at 500 Bangla and English medium schools across the country. The comics based on ‘The Unfinished Memoirs’ of Sheikh Mujibur Rahman will be distributed to the schools by Bishwo Shahitto Kendro (BSK). The publication of the Graphic Novel is a commendable step by the Centre for Research and Information (CRI) to strengthen the backbone of the younger generation with the ideology of Bangabandhu. Besides, the initiative taken by bKash to spread the novels to the schools will surely add a noteworthy boost to the whole process.

Five sets of the graphic novel which implies an aggregate of 40 books will be given to every one of the 500 Bangla and English medium schools the nation over.

Such an impactful initiative from the MFS market leader, bKash!

We all know about the competitive nature of the business ecosystem of Bangladesh nowadays. To stand out on the customer mindset, brands often need to come up with creative and engaging communication. However, when you are a market leader, your job becomes a bit more complex yet very important. We all know the legendary proverb- “With Great Power Comes Great Responsibility”, right? However, for a market leader in the business world, it becomes- “With Great Success Comes Great Responsibilities.”

Such an initiative like spread the ideology and history of our Father of The Nation, Bangabandhu Sheikh Mujibur Rahman, is proving that bKash is not only in the business of making the customers satisfied but also in a mission to develop the nation.

How? First, let us dissect the impact of this particular initiative of distributing the graphic novel ‘Mujib’:

On a mission to build the next generation

‘Mujib’ portrays direct insight into Bangabandhu’s childhood, adolescence, and social and political exercises in a configuration reasonable for both the kids and young people with an energetic combination of dialogue, stories, and illustration. So, the graphic novel will open the gate for both the kids and young people to know more about the greatest Bangali of all time and the architect of sovereign Bangladesh.

Two points to take out from here:

Let’s focus on the second one a bit,

Distributing 5 sets of total 8 issues to each school means 40 students will have the opportunity to read about the Father of The Nation from their school libraries together at the same time. Hence, bKash is trying to build a habit of reading from a very young age for the students when the world is surrounded by numerous toxic media for this young lives.

Well, sponsoring wasn’t enough either for bKash. In the 2020 Book Fair, bKash collected books from visitors, donated from its own fund, and distributed all 7,500 books among underprivileged children through Obhizatrik Foundation. bKash is carrying on the effort in this year’s book fair as well.

Watch the AV for this year, it will speak to you directly about the goal of bKash for such an act of book donation.

bKash has also been offering cashback at book fairs for the last eight years to encourage people to buy books.

There is another indirect impact that we all might have overlooked of bKash’s effort to spread the graphic novel ‘Mujib’.

So, this was our take on the initiative to distribute the graphic novel “Mujib” by bKash. What’s your thought on this? Let us know and for more updates, be with Markedium.

Prev Next
Subscribe to our newsletter
Sign up here to get the latest news, updates and special offers delivered directly to your inbox.
You can unsubscribe at any time
0 0 votes
Article Rating
2021AprilBangabandhubKashMFS industry BangladeshMujib
Share FacebookTwitterGoogle+ReddItWhatsAppPinterestEmailLinkedinTelegramViber

How bKash Hits All the Right Notes with Its 1% Extra Cash-Back on Remittance Offer?

Undoubtedly This is a very nice initiative. Children will know about our country and Bangabandhu Sheikh Mujibur Rahman.

0
Reply
Subscribe to our newsletter
Sign up here to get the latest news, updates and special offers delivered directly to your inbox.
You can unsubscribe at any time