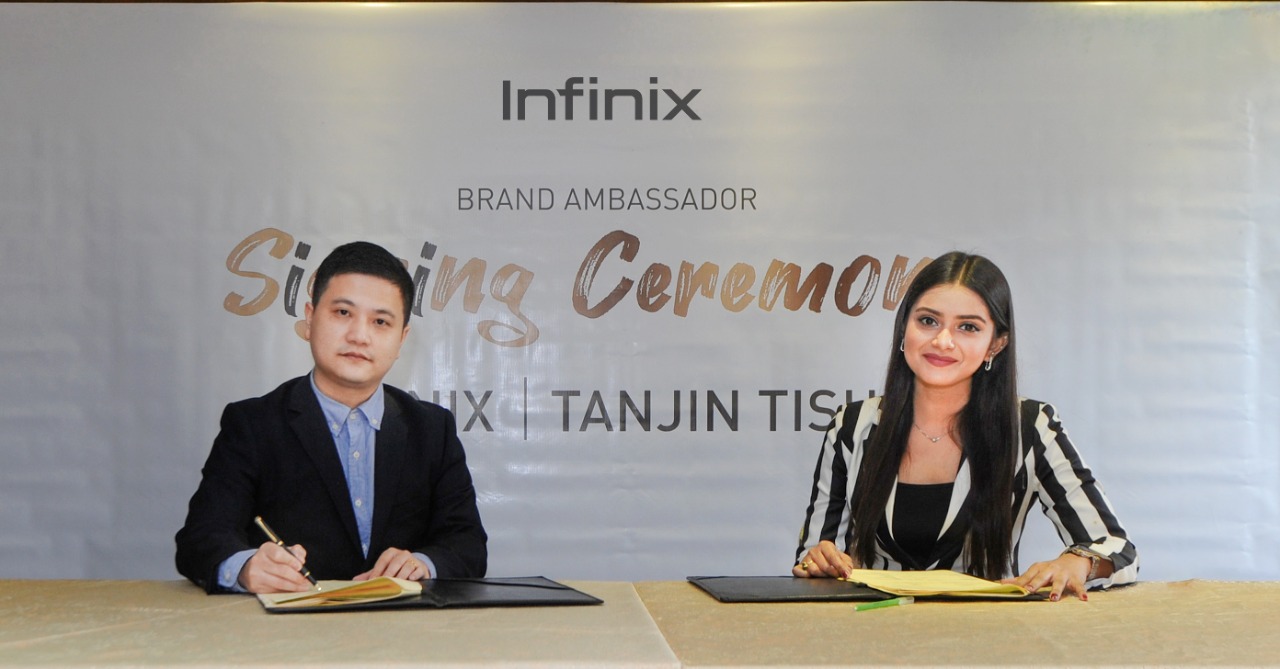 Popular model and TV Actress Tanjn Tisha has renewed contract with the premium smartphone brand, Infinix, as Brand Ambassador for the second year, said a press release. As per the agreement, she will be promoting the Infinix brand mobiles and its other devices throughout the year. The Bangladeshi Model-Actress has performed her role wonderfully as Infinix Brand Ambassador since last year.

The smartest-growing smartphone brand Infinix has rapidly gained fame as the premium smartphone ‘brand of choice’ among young Bangladeshi smartphone users and especially gamers. Tanjin Tisha has contributed successfully in the year-long promotional campaigns of Infinix. Infinix Bangladesh hopes that their agreement renewal with her will achieve a greater customer reach and upscale the reputation of Infinix brand’s latest technology and premium quality smartphones among the youth at all levels across the country.

Expressing her feelings on renewing her contract with Infinix, model Tanjina Tisha said, “Infinix has grabbed the Bangladeshi youngsters’ attention through its latest editions of smartphones that feature trendy designs, cool features and premium quality. As a young representative of this generation, I’m very honored to promote a top-favorite brand among the Bangladeshi users. I believe this year Infinix will solidify its market presence by launching more innovative smartphones with advanced technology.”

According to Infinix Bangladesh, Tanjin Tisha is the best choice to represent the appealing design and latest technology of Infinix to the new generation of smartphone users and through her powerful media influence till date, she has been promoting the brand and message of Infinix successfully to its users in Bangladesh. The Infinix family and all concerned officials are very happy to have renewed contract with Tanjin Tisha as the brand ambassador of the smartphone. Therefore, they hope that in the upcoming year, Tanjin Tisha would add more value in the execution of new year plans and activities of Infinix brand.

Furthermore, Infinix has also engaged with the country’s top-tech reviewers and social media influencers in a new year celebration program. Infinix over the year has been doing promotional campaigns with them. So, to honor their work and keep up with them, Infinix presented them with crests and gifts. The program also included a signing ceremony for the contract renewal of Infinix Brand Ambassador. This event was attended by Mr. Yi Liu, Country Manager, Infinix; Mr. XINGGUANG Chen , Marketing Manager, Infinix; Tehsin Musavee, PR Manager; Shyamol Kumar Saha, COO (Chief Operating Officer of Transsion Bangladesh Limited) along with other top officials of the company.

“Shopnopuron”: The legacy of success passed on from father to daughter; brought to you by Robi