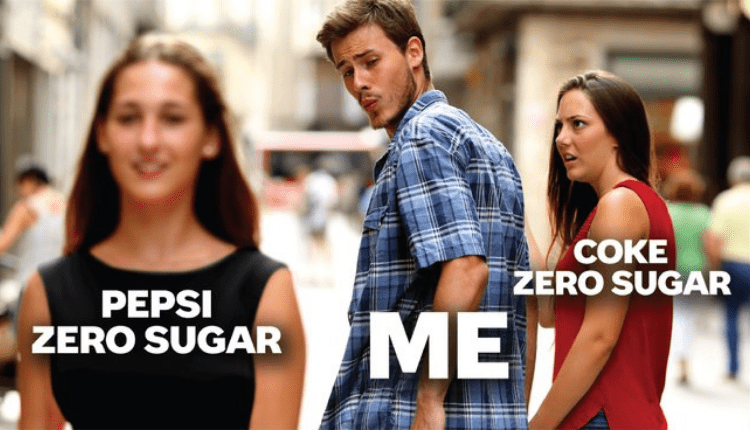 It’s that time again when we get to experience the iconic rivalry between Coca-Cola and Pepsi! With the latest addition in the COLA WAR- this time Pepsi strikes first with their version of a very popular meme!

Over the years, “Cola Wars” have given us some appealing content where we saw how these brands challenge each other with wittiness and creativity. Just recently, Pepsi challenged Coca-Cola’s fans to go for #MyCokeBreakUp for a particular coke product. To all the cola lovers, Coca-Cola and Pepsi are famous for their “Thinking Outside The Can” concept. Even recently, Pepsi’s Take on the “Jealous Girlfriend” meme to position their product of “Pepsi Zero Sugar” was undeniably entertaining. The original meme showed a distracted boyfriend looking at some other girl and as a result, the girlfriend became jealous.

Read More: Three Mobile: The Campaign That Saved An Island

Hey @CocaCola IT’S NOT YOU, IT’S ME

Surprisingly, Pepsi was able to win the internet with the same concept of the meme but the tweak was in their presentation! Pepsi introduced the girlfriend as “Coke Zero Sugar”; the boyfriend as a customer who was distracted by the other girl- or in this version “Pepsi Zero Sugar”. This all led to the message that after the reformulation of Coke Zero Sugar, the “good taste” was missing and this worked as an advantage for Pepsi.

In another follow-up post, Pepsi challenged again by persuading the Coca-Cola fans to break up with Coke Zero sugar by creating a buzz with #MyCokeBreakUp. They also added that while New Coke Zero keeps on changing, Pepsi is ready to welcome the heartbroken fans of Coke Zero Sugar with their “always good in taste” promise.

Hey Coke Zero drinkers, it’s time to move on …can we buy you a drink?

Share a pic of you with your Pepsi Zero Sugar using #MyCokeBreakUp and make it official!

We can definitely agree with the fact that since the pandemic has brought a significant increase in soda consumption, the recent positioning strategies have become fierce as well. So cola lovers, who will conquer this “COLA WAR”? For more updates, be with Markedium.