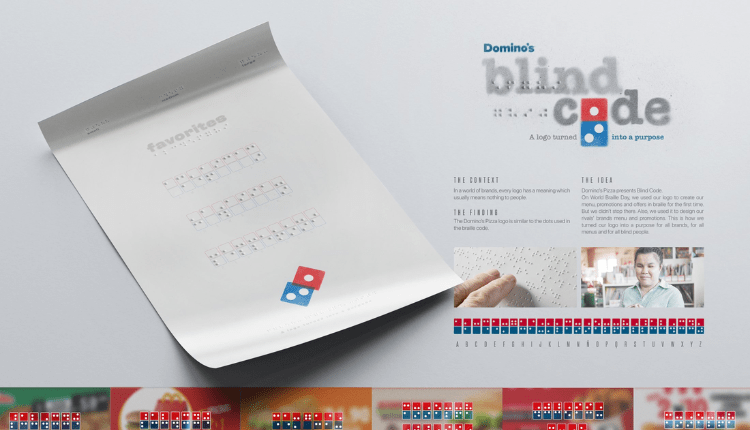 Each logo has a meaning or story behind it in a universe of brands. However, it usually makes very little difference in people’s life. According to a World Health Organization report, there are 284 million visually impaired individuals on the planet. Among them, 39 million individuals are blind. Keeping this in mind, Domino’s transformed its logo into a purpose on World Braille Day.

Read more: Domino’s Pizza: Welcoming 10,000 Recruits With The Symphony Of The Football Anthems.

To recognize World Braille Day, Domino’s Pizza transformed its logo to the dots utilized in a Braille code. The company used its logo to create its menu, promotions and offers in braille code for the first time. Interestingly, they didn’t stop there. Likewise, they utilized the same idea to design their rivals’ brands’ menus, promotions and offers to intend to transform their logo into a second language. Together, they did this innovation for all brands and menus. And most importantly, for every blind individual.

“Now all Restaurants will have Braille Menus, Thanks to Domino’s” – CNN

As you understood the plot and purpose of the advertisement. Let’s discuss some powerful insights we learn from Domino’s blind code campaign, shall we?

Read more: Bournvita’s Latest Ad Inspires To Understand The Difference Between Failing and to be A Failure.

The combination of Domino Game and Braille language

To begin with, we can understand that Domino’s logo is inspired by the game Domino. In other words, a domino is a small tile representing the roll of two dice. The tile is commonly called a bone. Further, it is rectangular with a line down the center. Each end of the tile contains a number.

On the other hand,  Braille is a reading and writing system. People with visual impairment and blindness.   Braille operates just like printed text. Moreover, a code reproduces a language’s sounds, phonetics, and semantics. Throughout the ad, we can see the excellent blend of these two things.

A Whole New Genre to Connect Everyone Under Their Parasol

Blind people consistently fail to appear on the most prominent brands’ radars. This inability to engage with these consumers could prove extremely costly from ethical and economic perspectives. Hence, Domino needed to be displayed a greater diversity in its advertising. Therefore, it is the right thing to do, and we are also getting closer to a broader cross-section of consumers.

An excellent way learns a second Language and communicates with visually disabled people.

Anyone, regardless of age, can achieve fluency in a new language. However, how we approach learning a new language is important to eliminate our self-doubt. Usually, when it comes to learning a second language, we think of any superior international language. Instead, Domino’s pizza created a unique, fun way to learn a unique language we don’t usually think of. To date,  people connected to the visually disabled felt the necessity to get some idea about blind code. Now, those days are over. Domino came up with such an innovation for all the brands and themselves that we will not feel the stress of learning a second language. Eventually, we will learn subconsciously by watching the blind code when brands embrace this culture soon. Additionally, we can learn an interesting in-house game which is Domino.

A New Milestone is set in Branding  and Advertising Industry

In this TVC, we saw that Domino’s pizza used its color code and logo theme in all the conversions. They distinguished the alphabet and numbers using Braille code in the same manner. Significantly, the game changer is the way they represented their rival brands through their logo theme and color. This may represent unity and diversity throughout the brand. Besides, we think it’s also an iconic move by Domino’s pizza. Because when blind code usage becomes a culture, people will consciously or unconsciously remind Domino’s pizza. For the hell of a job they did in the history of branding and marketing.

In this instance, they implemented this innovative idea on their packaging (Boxes), Menus. Further, they printed them for some delivery foundations and blind people communities, such as Louis Braille House, Blind SA head office, etc.

So, this is the story of how Domino’s pizza turned its logo into a second language:

In short, For all. For more updates, be with Markedium.