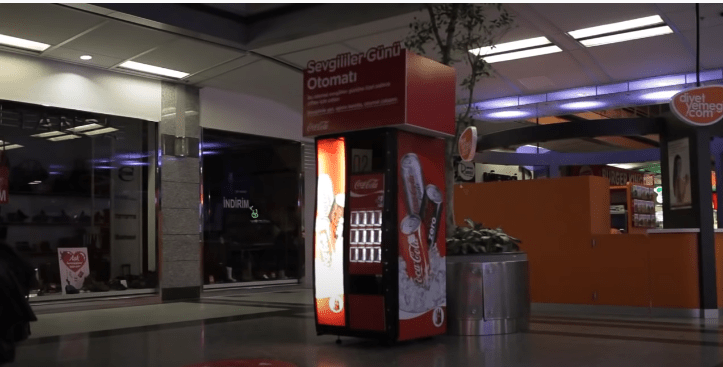 Coca-Cola has taken the world by storm with its mesmerizing product offerings for decades now. The name has become synonymous with soft and carbonated beverages due to their excellent taste. But, if there is one thing that the company has outdone their taste with; it’s their marketing campaigns. Coca-Cola has built a reputation as a company focusing on grabbing the attention of the consumers in versatile ways. In 2012, Coca-Cola made another such attempt, with a simple remote-controlled vending machine.

This creative campaign was a Guerilla Marketing attempt by Coca-Cola to celebrate Valentine’s Day in a truly unique way. The campaign had a widespread outreach, as more and more people started noticing. Initially, a few people curiously tried to decipher Coke’s message in order to grab a soda for themselves. By the time people figured out how the machine actually worked, it was couples’ fiesta.

The incredibly creative style of the campaign focused on promoting one simple message. Happiness. In celebration of Valentine’s Day, Coke decided to target their Guerilla Marketing campaign to one specific demographic; couples. This was Coca-Cola’s unique way of bringing loved ones together and cherish their togetherness.

Imagine, a machine asking you to prove that you’re a couple. How do you do it? Well, Coke has the answer. The couples stood in front of the machine, held each other close, and kissed their loved ones. Instantly, two cans of Coca-Cola were served through the vending machine.

A truly inspiring campaign, with a truly unique execution.

What are your thoughts on this throwback Coca-Cola Guerilla campaign? Let us know your thoughts, and stay with Markedium!

Branding Without Branding: Take A Look At Coca-Cola’s #Openitlikeneverbefore Campaign

Domino’s Blind Code: A Logo Turned Into A Purpose