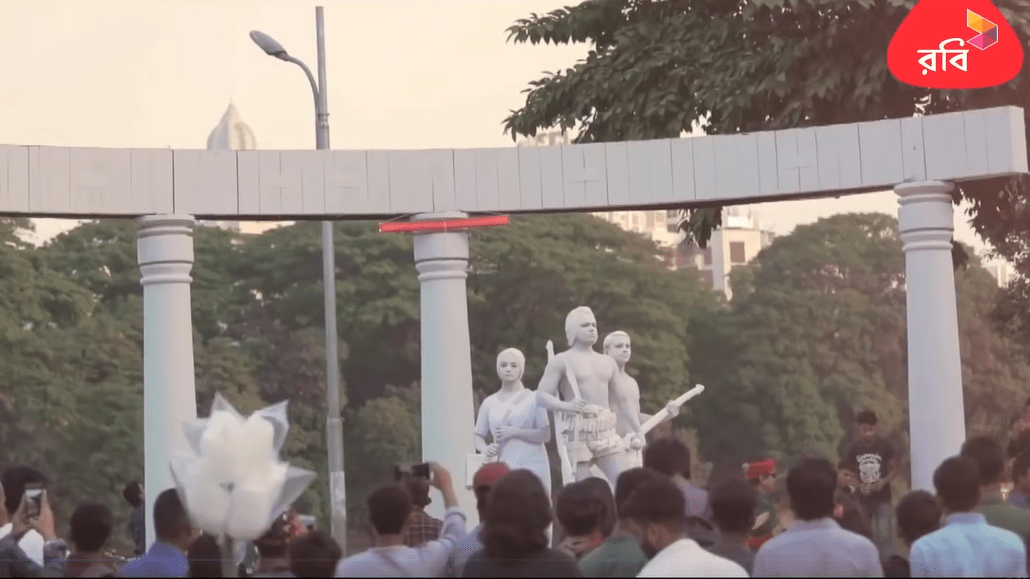 [dropcap]O[/dropcap]n the occasion of victory day, Robi tried to celebrate the day with the general mass through their new outdoor campaign. The campaign demonstrates the unity that was required to achieve the place for Bangladesh in the world map.
Robi’s team went out and made and relive the symbol of liberation war by creating a human replication of the legendary sculpture “Aparajeyo Bangla” in Dhanmondi lake park aka “Rabindra Shorobor”. To our utmost surprise, celebrity singers like Minar, Elita, Porshi And Maksood took part in the campaign. All the singers with the crew members sang the legendary song based on our liberation war known as “পূর্ব দিগন্তে, সূর্য উঠেছে… রক্ত লাল” to engage the audience and give them an early essence of this year’s victory day.

Immediately the song escalated among the live audience and all of them started to participate and  sing the song along with the artists. The environment suddenly transformed into a patriotic fervor. The video content suggests individuals to harp on the intensity of coming together with the intention of igniting the power within to clinch triumph from Pakistan in 1971.
The campaign has already triggered the emotions of general mass in digital media. Till Thursday, December 13th- the audio visual has received 3.5k comments, 37k+ shares and viewed more than 4.9 million.
So, what do you think about the campaign? Let us know.
Video Credit: Robi Axiata Limited

Embracing the Essence of Ramadan with the Sweetness of Pran…

The Best Marketing Stunt Of The Year: Payless Pranks The Influencers

Fresh Ramadan Combo Pack To Share Kindness With Those Who Matter

This Ramadan, Click Extends Help To Spread Wind of Comfort