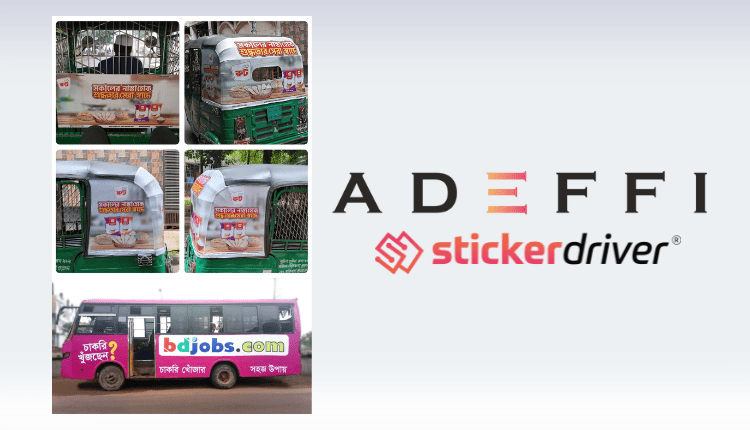 With the launch of the ROOT food & Bombay Sweets campaign in Dhaka, Adeffi Ltd, the parent company of Sticker Driver is elated to announce that they have successfully executed their long-held ambition for CNG advertising. Having stated that, Adeffi Ltd also want to highlight that with the launch of their BDjobs campaign, they have entered the Chittagong Bus advertising arena.

ROOT food & Bombay Sweets’ CNG advertising in Dhaka as well as BDjobs Bus advertising campaign in Chittagong will assist these companies in gaining a competitive edge over their rivals in a number of ways. By launching the campaign they’ll gain the first mover’s advantage in this tech-integrated vehicle advertising space as their competitors haven’t strategically advertised their brands in this space yet.

Furthermore, ROOT Food and Bombay Sweets will have access to real-time data through Adeffi’s dashboard and the ability to track these vehicles. They will be able to follow the CNGs’ real-time location, obtain computed distance coverage of the wrapped CNGs, and view their route network. Additionally, Adeffi’s dashboard will give them access to monthly picture updates of the advertised CNGs so they can see the condition of the sticker wrap as well as real-time data on impression totals via the Google API.

On the other side, in Chittagong, BDJobs is fully utilizing Adeffi’s moving billboard approach. A moving billboard is a large billboard that features any brand’s advertisement and travels to various areas, generating thousands of impressions along the way. Through this campaign, BDjobs will be able to take advantage of this scenario in Chittagong City and follow the real-time positions of the buses to ensure that they are traveling the distance that was promised.

Adeffi Ltd, the parent company of Sticker Driver strives to deliver the benefits of mass outdoor advertising to promising clients in the most strategic way possible.

Let us know your thoughts about the campaign, and for more updates on the creative world of Bangladesh, be with Markedium.