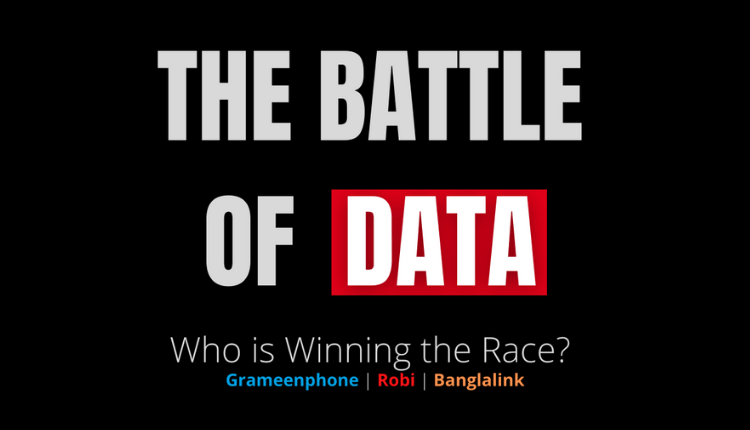 The Data Race Is Heating Up, But Who Is Ahead?2 min read

The telecom industry is taking a huge shift in focus by concentrating on data service revenue rather than voice revenue. With the growth of internet consumption people is using OTT services like WhatsApp, IMO, messenger, etc. As a result, the three big telecom companies – Grameenphone, Robi & Banglalink are seeing huge growth in data revenue. The growth is further accelerated by the huge demand for data packages since the start of the coronavirus pandemic. The pandemic made people more reliant on the internet due to work from home and online classes.

In this article, we will take a deep dive into how Grameenphone, Robi, and Banglalink are doing in terms of data revenue and which company is reaping the most benefit.

Grameenphone also leads in data revenue, but Robi is catching up with the telecom leader 6.2 Mn fewer subscribers. Robi has the highest revenue per internet user with Tk 213 followed by Grameenphone with Tk 199. Banglalink lags the indicator with Tk 159. In terms of YoY growth, Grameenphone lagging behind its competitors by growing only 3.6% whereas Robi and Banglalink grew by 23.1% and 15.0% respectively. Grameenphone’s growth is not satisfactory as about half of the company’s mobile subscribers are still untapped.

All three companies have grown significantly in terms of data consumption per user. Banglalink grew the highest with 43.7% YoY followed by Grameenphone and Robi with 39.7% and 36.1% YoY growth respectively. Robi’s users consume the most data with 3,999 MB each on average.

It is evident from the numbers that all the telecom players are benefitting from the data demand growth which has been accelerated by the pandemic. Grameenphone which possesses the most mobile subscribers has still the highest potential to get the most out of the data service. However, the company is lagging in most growth metrics.

Banglalink has done well in this quarter by growing data revenue by 8.9% and data consumption per user grew by 43.7%. The company needs to keep up the growth level if it expects to get close to Robi and Grameenphone.

Robi has been the most successful telecom operator in Q2’21 in terms of data service. Robi has done well in all of the growth metrics. The company has surpassed Grameenphone in revenue per internet user as the company has been successful in increasing mobile consumption per user. Robi has also successfully converted 72.4% of its mobile subscribers to data users.