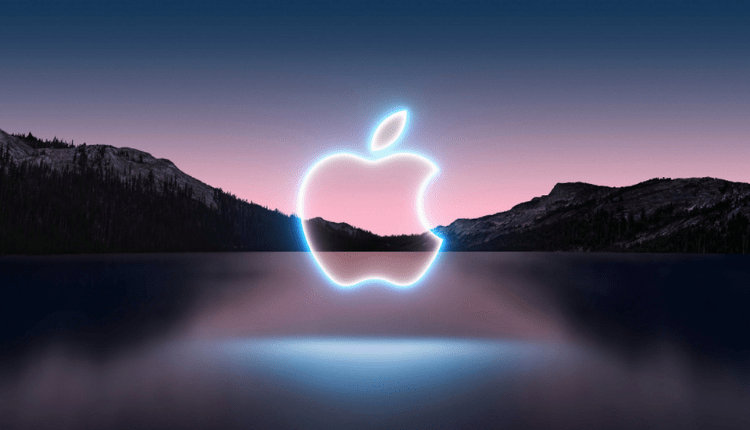 Kicking off this year’s keynote with an energetic performance of ‘California Souls,’ Apple set the bar high at today’s event, setting expectations high!

With the launch of an entire lineup of new upgrades, you’ll quickly see that these expectations were promptly met. The event witnessed the launch of new hardware, software, and an array of upgrades to past product lines.  These updates included upgrades to 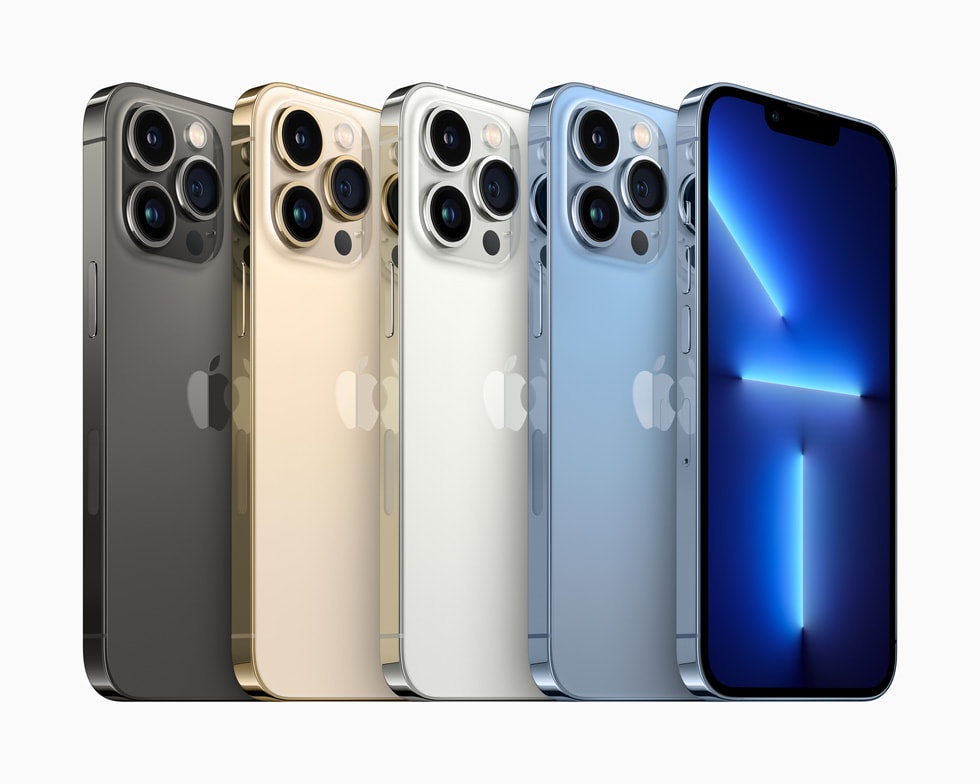 Finally, let’s talk about the two biggest launches that everyone has been waiting for! The iPhone 13 and the iPhone 13 Pro were announced at the end of the event to keep dessert for last.

Although, unlike last year’s release of the 12’s, the iPhones 13 doesn’t pack the same design changes. However, this year, you are getting a well-built phone, with much better specs than previous generations and the existing competition.

The iPhone 13 was announced in two sizes, the 13 and the Mini, measuring in at 6.1” and 5.4”, both boasting Apple’s ‘Super Retina XDR display. An OLED display was a big update from previous generations, with a 28% brighter screen going up to 1200nits

But the biggest game-changer Apple came with this year was the diagonally set camera system, focusing on a 12Mp Ultra Wide lens and a 12MP Wide Lens with sensor-shift OIS. Both these cameras perform astoundingly, providing improved noise reduction, much greater detail, and an improved night mode.

However, the part of the event that caused jaws to drop was the introduction of the ‘Cinematic Video Mode.’ An automatic system that helps even the novice create cinematic masterpieces by creating beautiful depth effects. A method that is said to have the ability to “change the language of cinema.”

The iPhone 13 Pro also saw the launch of two new phones the Pro, and the Pro Max, a 6.1” and a 6.7” display. 4 new colors were introduced for the phones, with one that stood out quite a bit from the rest, ‘Sierra Blue.’

Apart from the larger displays, the biggest update within the 13 Pro is a three-lens system featuring a Telephoto lens, an Ultra Wide Lens, and a Wide Lens. These lenses are said to have the ability to allow the phone to take “Beautiful Photos in any Situation.” Since the phone not only allows you to have a 6times optical zoom range, but you now shoot in Macro as well. 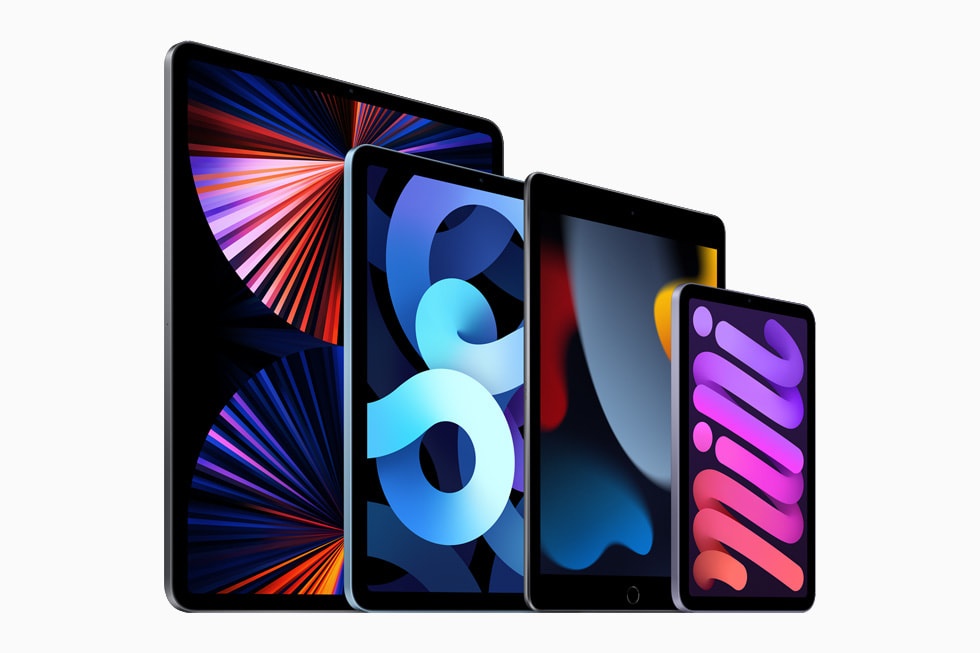 Unlike a few other products lines introduced at the event, the iPad didn’t see a significant design change; the outlook of the machine remains the same! However, the internals has now been specced up to some extraordinary levels.

Now featuring the extravagant A13 Bionic chip, the iPad is faster than ever! An increase in the number of cores allows the GPU to bump out a 20% increase in responsiveness. Thus, it gives the iPad a solid increase in its ability to run highly intensive applications like Adobe Fresco and Procreate effortlessly!

The new iPad now comes with a big improvement to its camera set up; the front camera now features a 12MP Ultra-Wide lens. Taking a page out of the books of the iPad Pro, this camera system also comes with its ‘Center Stage’ included, allowing face time to be a more engaging experience.

Apple also announced the inclusion of an improved true tone display and iPad OS 15. All these updates are promised to create a user experience that just can’t be met by other players in the market. Starting at only $329 for 64GB’s, Apple does get on the more competitive end of the scale.

One of the Biggest updates came knocking at the door, with the announcement of the iPad Mini. Unlike the iPad, the Mini saw a complete design revamp. Following the design style of the iPad Pro, the Mini has been given an ‘edge to edge screen’ design. The screen comes in at 8.3 inches, while the footprint of the Mini has not been altered in any way. Thus, providing a much cleaner and drastically more effective product.

But the Mini isn’t all looks; the small thing packs a big punch. An updated A15 Bionic Chip installed onto the Mini gives you the ability to do so much more. The 6 Core CPU and 5 Core GPU are 40% and 80% faster than previous models. With the added USB-C port and 5G connectivity, the Mini easily becomes one of the most versatile products from today’s launch.

The Mini saw a major improvement in the Camera system; now featuring a 12MP Ultra Wide Front Camera, with ‘center stage’  features included. Plus a 12MP Wide Back Camera, with true tone flash, for low light imaging. All this starting at $499, with a wifi and cellular model available. 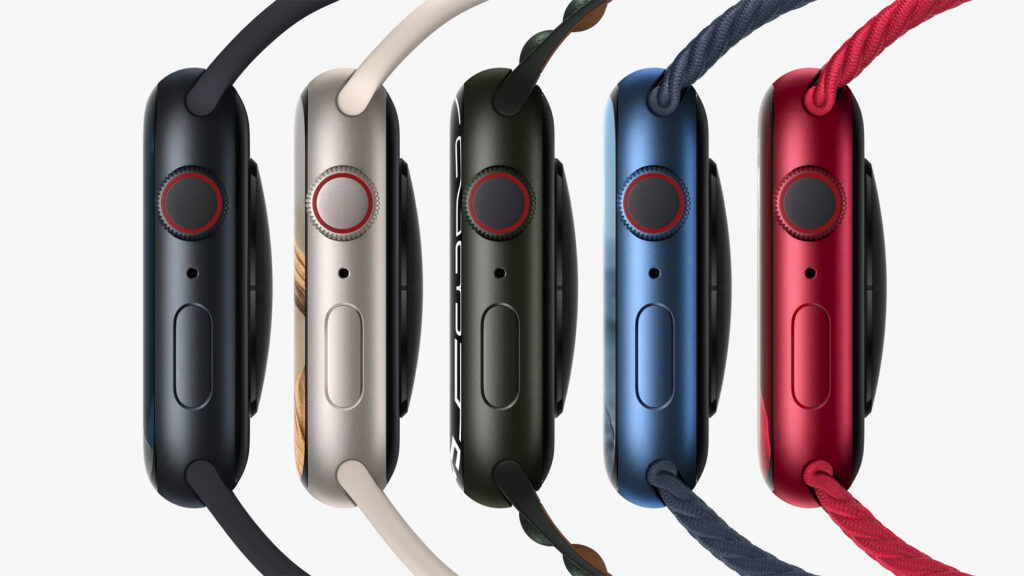 Another extensive redesign was pulled off in the Apple Watch Series 7, launching Apple Watch’s ‘Largest and the most advanced display.

With the mere 1.7mm bezel, the Apple Watch has come a long way from previous generations. More space on the screen means the watch is capable of displaying larger portions of texts. Moreover, now you can fit the entire keyboard itself, allowing you to type or swipe from the watch

The watch has been made even more durable than previous generations, with a crack-resistant front crystal, IP6X dust resistance, and WR50 water resistance. But it’s not just the externals; the internals has been specced up as well, featuring a battery that’ll last you the entire day. And a quick charging system that allows you to get to 80% charge in only 45mins.

This year Apple has put a significant focus on the health and fitness criteria of the watch. The watch now features ECG and Blood Oxygen level monitoring systems. The watch seamlessly integrates with the Apples Fitness Plus service, which has so many new exercises to offer. Now to an added 15 new counties!

A Microfilm series by Huawei featuring “Courage, Love and Patience”