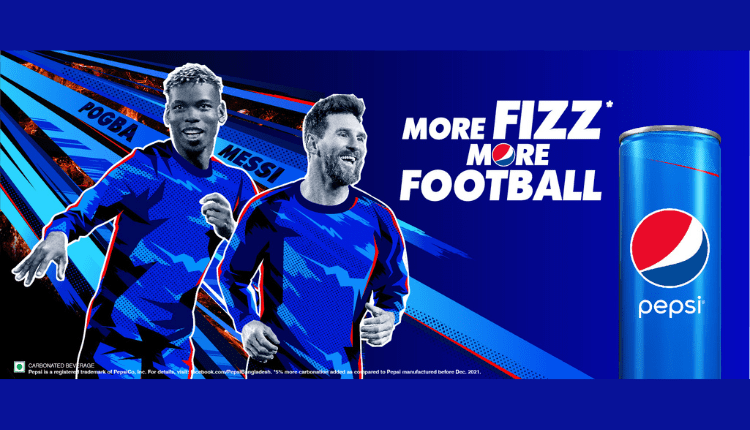 Pepsi has announced the launch of a new international campaign in Bangladesh called “Thirsty for more” to celebrate an endless desire for fun, exciting, and unexpected consequences.

According to a press release, the campaign includes the premiere of the thrilling sports film “Nutmeg Royale,” which includes global football legends Leo Messi, Ronaldinho, and Paul Pogba.

In accordance with this release, the company has debuted its eye-catching, new, limited-edition Football-themed packaging. Pepsi is getting ready to paint the town blue with Messi and Pogba on cans and pet bottles.

With football’s most precise move at its core, the epic new film emphasizes the exhilaration of the action and the unanticipated possibilities that arise when the world’s most experienced footballers come together.

“At Pepsi, our brand has always been fueled by youth culture – whether that’s being at the forefront of product innovation or tapping into what moves culture to shape our epic entertainment experiences. “Thirsty for More” is our commitment to celebrating the never-ending desire of those who want to have fun. We look forward to enthralling the audiences as they get thirsty for more- more Fizz, more Football.”

With football’s most precise move at its core, the epic new film emphasizes the exhilaration of the action and the unanticipated possibilities that arise when the world’s most experienced footballers come together.

The initial glimpse notably features Messi, Ronaldinho, and Pogba wearing something that football fans would recognize. This year’s TVC will pay homage to the iconic 2002 Pepsi football jersey, as a respect to the brand’s longtime and unprecedented impact on football culture. Fans are being encouraged to be on the lookout for exciting new content in the following 2 months, as the brand wants to inject more fizz and football into their life.

Sports has always connected powerfully with the consumers in Bangladesh, especially football, and to take things up a notch, we are happy to have kickstarted the football craze in the country with our new campaign, said Sharfuddin Bhuiyan Shamol, Head of Marketing, Transcom Beverages Ltd.

To sum up, Nutmeg Royale is an action-packed film that will have you on the edge of your seat, especially with these football superstars in front.

Domino’s Blind Code: A Logo Turned Into A Purpose