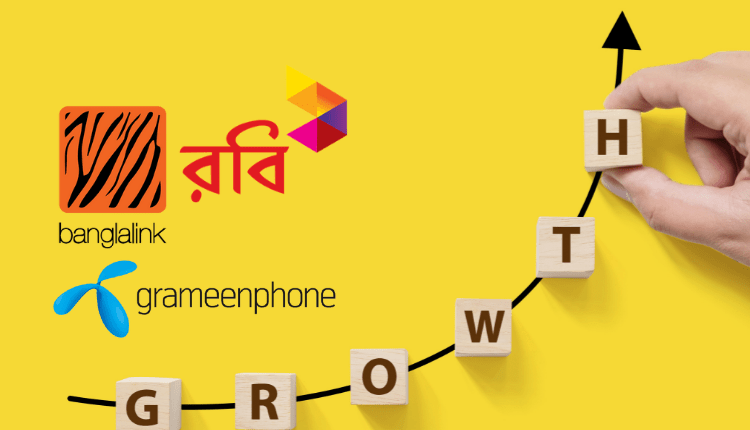 Grameenphone, Robi & Banglalink the telecom giants of Bangladesh have posted positive revenue growth in Q3’21 mainly driven by increased data consumption. The telecom industry is taking a huge shift as the rise of OTT platforms like WhatsApp, Messenger, Imo, etc. have stagnated the growth of voice revenue. As a result, the three telecom giants are now focusing more on data services and bundle packages to continue their growth trajectory.

Banglalink posted the highest YoY growth with 32.0% followed by Robi with 8.6% growth. Grameenphone’s data revenue grew 4.6%. The growth in data revenue is mainly attributable to the focus of the telecom companies on data services and bundle packages. As the demand for the internet is rising every year the telecom giants have put an increased focus to pounce on that opportunity. Hence all three companies showed growth not only in data subscribers but also in data consumption per user. 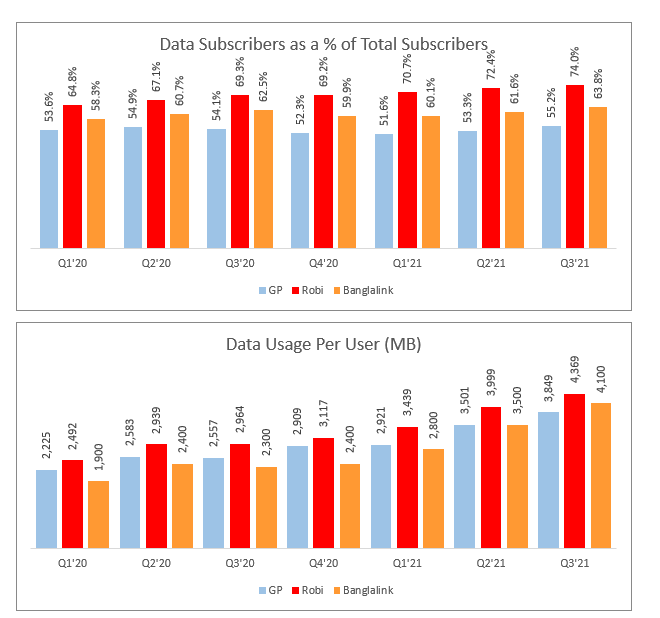 In terms of data usage per user, all three companies posted high double digits YoY growth. Banglalink posted the highest growth with 78.3% followed by Grameenphone with 50.5%. Robi posted a growth of 47.4%. The growth shows that the focus of the telecom companies on data services and bundle packages is clearly paying dividends.

Banglalink is the only company that showed YoY growth in Data revenue per internet user. Banglalink grew by 21.9% YoY whereas Grameenphone and Robi declined by 4.7% and 3.9% YoY respectively. Since both Grameenphone and Robi grew in data subscribers and data consumption per user, the only explanation for the decline in data revenue per internet user is reduced pricing on data packages.

It is evident from the numbers that all the telecom players are benefitting from the data demand growth which has been accelerated by the pandemic. Grameenphone which possesses the most mobile subscribers has still the highest potential to get the most out of the data service. However, the company is lagging in most growth metrics. Robi and Banglalink had a successful Q3’21 as the companies grew 7.8% and 7.2% YoY respectively. Both the companies had a great quarter in terms of data revenue growth. 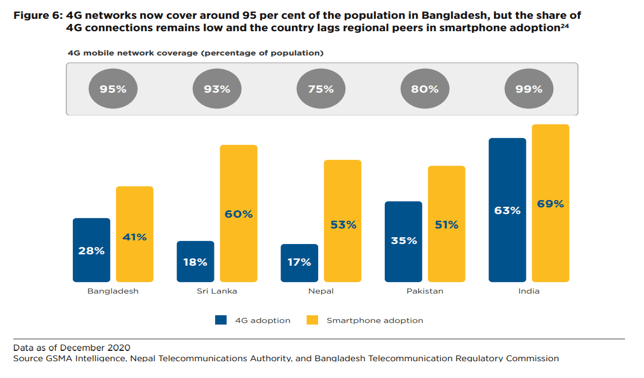 Revenue from data services still has a long way to go as the adoption rate of 4G is only 28% in 2020. According to GSMA, the adoption rate is likely to increase to 38.0% in 2025. Hence with the rise of smartphone usage, it is expected the three telecom giants will be the biggest beneficiaries of high data consumption.