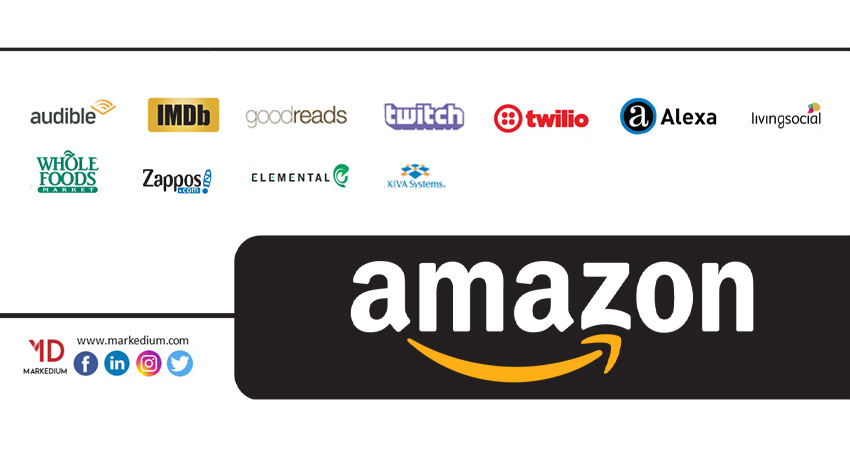 12 Key Subsidiaries That Took Amazon To The Apex5 min read

Even though, many people thought that Amazon would fold during the dot-com bubble burst. Instead, the company survived and went on to become one of the biggest retailers in the world. At the present time, Amazon has a whole host of subsidiaries worldwide that the MNC considers the Amazon family.

In the beginning, Amazon started as an online bookstore. Such as, selling college textbooks. Over time, the company covered every other niche possible to sell online. Hence, the mega-retailer sells just about anything a customer can desire online.

Subsequently,  Amazon-owned other retailers. In other words, the company at present owns over 40 subsidiaries. Right now, Amazon.com Inc. AMZN is one of the biggest e-commerce companies in the world.

Therefore, I am going to illustrate 12 key companies that belong under the AMZN parasol. 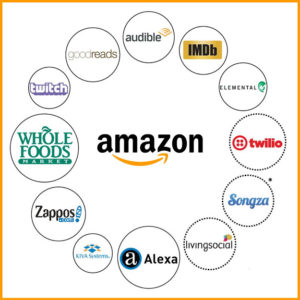 As the largest producer and retailer of audiobooks in the United States, Audible Inc. is one of Amazon’s most well-known businesses. Following a $300 million acquisition in 2008, the company became a subsidiary of AMZN. In addition to selling audiobooks, Audible provides its customers with downloadable audio versions of newspapers, magazines, and radio programs.

The book publisher that specializes in “bodice-ripper” romances, Westerns, and mysteries were bought by AMZN in 2012. Avalon books are now imprints of Amazon Publishing.

Shopbop offers a comprehensive, hand-picked collection of apparel. In addition, accessories from the industry’s foremost contemporary and designer labels. Along with renowned customer service, Shopbop delivers unparalleled wardrobe advice, cutting-edge editorial lookbooks. Besides, it has innovative features and exclusive collaborations with forward-minded brands. The result is a highly personalized, satisfying, and a fun shopping experience that caters to style-minded women around the globe.

Quidsi is one of the world’s fastest-growing e-commerce companies. In addition, parents of Diapers.com (baby care), Soap.com (household essentials), and BeautyBar.com (prestige beauty). The company’s mission is to make life easier by creating a new type of e-commerce experience, delivering in 1-2 days, and providing incredible customer service. Quidsi is redefining e-commerce by combining the focus and customer connection of a specialty store with the scale, efficiency, choice, value, and reliability of a massive global retailer. Amazon bought it by $545 million.

Many people know who Alexa is, but still don’t understand what it can do. Alexa is the voice AI, accessible through Echo, Dot, and Echo Plus owners. However, Amazon’s virtual assistant is not just a recording. This highly interactive AI program can help create a customizable living experience while also connecting other household devices to its central system. In this article, we review new features, other compatible devices, and how to create routines with ease. Amazon bought it by $250 million.

A Live-streaming video platform that Amazon bought for $970 million on August 25, 2014. Twitch began as a live video-game streaming platform in 2011 and grew monumentally up until its 2014 Amazon acquisition of $970 million. Many speculated why an online retailer had such interest in a video game streaming platform until financial insiders uncovered the purchase was an investment in Amazon Web Services (AWS). According to Business Insider, the big names in tech were confident in gaming’s future.

With more than 90 million registered users, Goodreads is a thriving online community of book readers from around the world. The website allows users to discover new titles based on what they have read in the past. It also allows its members to give reviews on books and share their reading lists with others. Many self-published authors use Goodreads as a medium to promote their work and engage with their readers. Goodreads began in 2007, and Amazon purchased the website in 2013.

The Whole Foods Market chain became famous for selling organic and healthy food. Whole Foods came a long way in the few decades since its creation. It expanded to include over 470 locations in the U.S., UK, and Canada. Then, the largest and most newsworthy Amazon acquisition happened in 2017 when the online retailer bought Whole Foods for $13.7 billion.

It is a footwear and apparel retailer that Amazon bought by $1.2 billion on November 2, 2009. About Twenty years ago, it started as a small online retailer that only sold shoes. Right now it covers everything of clothing lines. It aims to inspire the world by showing it’s possible to simultaneously deliver happiness to customers, employees, vendors, shareholders, and the community in a long-term, sustainable way.

To sum up, with a  worldwide growing presence, Amazon has positioned itself to be a major global company. With its quality in product offerings, original products and programming, and delivery services, Amazon shows the potential to continue to grow on an unprecedented scale.

Not to mention, Its success is mainly attributed to its approach to its customer. As described in its mission statement, everything Amazon does is about enhancing the customer experience.